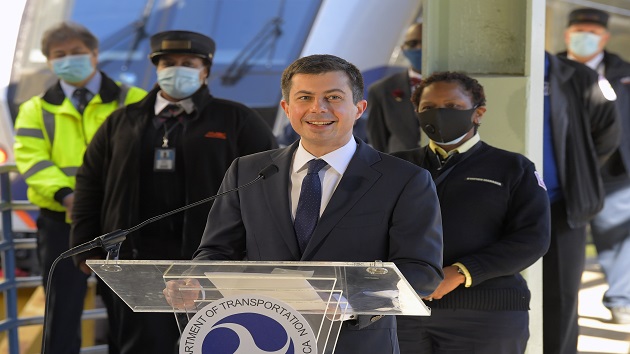 (WASHINGTON) — While there’s no margin for error on the Democratic side — a single senator could derail coronavirus relief — recently confirmed Transportation Secretary Pete Buttigieg said its urgent need will ensure Democrats can pass the massive spending package.

“Each passing day the need for relief becomes more urgent,” Buttigieg said on ABC’s “This Week” Sunday, “ensuring that we have the resources to defeat this virus, but also to support American working families.”

“That’s not just a unifying priority for the Democratic coalition and something that has a remarkably large degree of support among Republicans — at least among Republican voters, Republican mayors — we’re hoping that will also show up among Republican legislators here in Washington. But, of course, that’s what the next few days will show,” he added.

Sen. Roger Wicker, R-Miss., said in a separate interview on “This Week,” that the White House shouldn’t give up on bipartisan negotiations too quickly.

After his meeting with 10 GOP senators regarding coronavirus relief at the begging of the week, President Joe Biden is slowly inching away from the promise of bipartisanship on a coronavirus relief plan, and said at the end of the week that he feels Republicans are not willing to go far enough. He warned on Friday that he didn’t want to get “bogged down” by negotiations.

Biden said this week that he was adamant about the $1,400 amount stimulus checks are set to be in his plan, but is open to adjusting income eligibility for the checks.

Biden’s $1.9 trillion proposal is raising eyebrows among some members of Congress and economists who say that the package is too large. A group of 10 GOP senators sent a proposal to Biden that would lower the income eligibility for stimulus checks from $75,000 to $50,000. Buttigieg said the package must provide robust support, agreeing with comments made by Sen. Bernie Sanders, who doesn’t believe the eligibility should be lowered.

“Really good points from the senator. Look you got hardworking families out there — you’ve got an ER nurse or a firefighter in that 60-range. I think it’s really important that we are taking care of working families,” Buttigieg said. “That’s obviously something that is being discussed in this process going back and forth with Congress and there needs to be robust support.”

Stephanopoulos challenged Buttigieg, “But if that’s what it takes to pass the bill — lowering the threshold — it’s worth it?”

“Look, there’s active conversation going on right now, obviously, but the bottom line is we have to support as many Americans as we can — as robustly as we can — and as quickly as we can. Time is of the essence,” Buttigieg responded.

Stephanopoulos asked Buttigieg what he plans to do in answer calls for help from the airline industry and Buttigieg said the concerns are being taken very seriously.

“So we’ve been speaking with airline workers and carriers across the country there is a lot of concern so many Americans depend on the aviation industry for their livelihood, and we welcome the conversation that’s going on right now,” Buttigieg said, adding that relief was something that the federal government has to “get right.”

Stephanopoulos pushed Buttigieg on the efficiency of choosing not to include airline relief in the current proposal.

“So you’re going to do it right away even if it’s not included in this package? Wouldn’t it be more efficient to include it in this package now?” he asked.

Buttigieg told Stephanopoulos that the concerns are being taken very seriously and relief is a part of the current conversation.

Sen. Roger Wicker, R-Miss., in an interview following Buttigieg on “This Week” said that Biden’s proposal is too big, pointing to remaining funds which have yet to be distributed from the last relief package. Wicker pointed to comments made by Obama-era economic adviser Larry Summers, who said the package could cause inflation.

“This package is way too big, based on the fact that we don’t even know how much of the $900 billion from December, has already — even been obligated, much less spent. And he said, this is going to be inflationary, so we need to be careful,” Wicker said of Summers’ comments. “I think Republicans are willing to spend between $600 billion and $700 billion more.”

A bipartisan approach has been left behind by the Biden White House, the Republican senator said.

“On five occasions in 2020, Republicans in the Senate, Democrats in the House came together with the administration and passed five COVID relief packages. They were all done — not only on a bipartisan basis, but with near unanimous support with the House and Senate. Only this year — after the president began his administration with a very hopeful speech about bipartisanship and unity — only this year have we somehow gotten to a point where this new president is saying, ‘$1.9 billion, no ifs, ands or buts,"” Wicker said.

“And a group of 10 Republicans talked to him, the first chance he had to meet with congressional leaders, and really more the White House staff than the president absolutely rejected any of their proposals,” he added.

Despite relief negotiations stalling among Democrats and Republicans, Wicker, the ranking member on the Senate Committee on Commerce, Science and Transportation, told Stephanopoulos that he looks forward to working with Buttigieg on a bipartisan approach to infrastructure funding, as did the newly-minted transportation secretary.

“We can’t keep kicking the can down the road,” Buttigieg said. “And I think it’s a great example of a bipartisan priority to get it right.”

Wicker said he was looking to follow the lead of some bipartisan infrastructure plans in some states, but the senator said his time will soon be spent in a “partisan” impeachment trial, referring to former President Donald Trump’s second Senate impeachment trial, which is set to begin on Tuesday.

“I would — a whole lot — rather be working with him this week … rather than going into a meaningless messaging partisan exercise like impeachment,” Wicker said.

Wicker was one of 45 Republican senators who cast votes signaling that they believe an impeachment trial of a former president was unconstitutional.

Stephanopoulos pressed Wicker on whether Trump should be held accountable for his actions.

“On impeachment, you just called it meaningless, and I know you believe it’s wrong to try a former president, but President Trump was in office when he advanced these false claims… Should the president be held accountable for those actions?” Stephanopoulos asked.

“The charge, George, … in the one article impeachment is that he singularly incited a riot to invade the Capitol and I do not think that will be proved, no,” Wicker said. “Now if there are other ways in the court of public opinion or if some — if some criminal charge dawns on some prosecutor, perhaps there’s another avenue there.”

Wicker also told Stephanopoulos that the chance to censure Trump is gone.

“Censure was offered by the minority leader in the House of Representatives. He offered that. It was rejected, and in my view, that ship has sailed,” he said.

Stephanopoulos pressed Buttigieg on whether or not the impeachment trial would slow Biden’s agenda– and delay delivering the proposed nearly $2 trillion in relief.

“The Congress has many Constitutional duties. Those duties all run at the same time as each other, but delivering on infrastructure for the American people is certainly part of that responsibility,” Buttigieg said.

Glenn Close, Jake Gyllenhaal, Leslie Uggams and more to unite for ‘Show of Titles’ musical benefit for Actors Fund
The IRS says 88% of families will receive a bigger child tax credit. How much will you get?
Climate change may be causing an early start to fire season in the West, experts say
Hall of Fame Broadcaster Marv Albert retiring
Trailer for Prince Harry, Oprah Winfrey’s docuseries on mental health released
Kidney donor and recipient meet for first time at baseball game