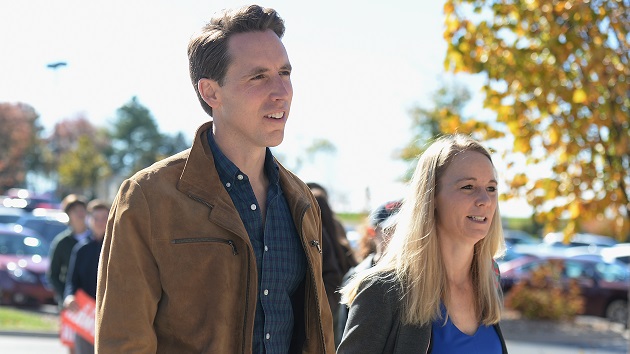 (WASHINGTON) — The wife of Republican Sen. Josh Hawley has filed a criminal complaint against one of the organizers of a protest last month outside their Virginia home.

The individual has been charged with a misdemeanor count of illegally demonstrating, but not charged with making threats or vandalism, as the Missouri senator initially alleged. A local magistrate found enough “probable cause” to issue a summons in the case, according to a police spokesman.

Hawley’s office said the complaint was filed in a court in Fairfax County, Virginia, with the defendant identified as activist Patrick Young of Washington, D.C. But as of Friday morning, Young told ABC News he had heard nothing about a criminal complaint, which wouldn’t become public until he receives it.

“If a summons has been issued, it is outrageous that a rich and powerful person — a United States senator — can go to their magistrate to get a summons to harass a normal person,” Young said in a statement, acknowledging that he helped organize last month’s protest.

According to Virginia law, any citizen can file a criminal complaint and seek a summons, though a magistrate must find enough “probable cause” to issue one.

Video posted online of the Jan. 4 incident showed protesters loudly demonstrating in front of the Hawley home for nearly 30 minutes, objecting to his claims that the 2020 presidential election was illegitimate and that Joe Biden shouldn’t be certified two days later as the next U.S. president.

At the time, Hawley and the couple’s two sons were in Missouri, while his wife, Erin, and their newborn daughter, were at the Vienna, Virginia, residence.

Within hours of the protest, Hawley posted on Twitter that “Antifa scumbags” had “screamed threats, vandalized, and tried to pound open our door,” condemning it all as “leftwing violence.” But protesters and others disputed his claims, with police saying they had not found evidence of violence at the protest.

In a statement supporting her complaint, Erin Hawley largely recounted what can be seen in the 50-minute video posted online, following the group of protesters as they gathered at a nearby shopping center and then walked to her family’s neighborhood, where they “shout threateningly,” she said.

The senator’s wife said she identified Young through news accounts of the protest, which was organized by the self-identified “anti-fascist” group ShutdownDC. As a ShutdownDC organizer, Young spoke to news outlets after the protest and defended it as “not threatening.”

He described the entire demonstration to ABC News as a “candlelight vigil.”

As depicted in the video online, as many as 20 protesters stood just feet away from the Hawleys’ front door, angrily shouting and using bullhorns as they repeatedly yelled chants such as, “Shame on you” and “Stand up, fight back.”

Phrases like “Trump lost” were written in chalk on the sidewalk, and a handful of signs were placed in front of their house.

At one point, the senator’s wife opened the front door and, while holding her baby, calmly asked the crowd to “clear out please.”

“We’ve got neighbors and a baby, thank you,” she can be heard saying in the video.

A female protester shouted back: “We need a future for your baby.”

In the statement supporting her complaint, Hawley’s wife said, “I was fearful and closed and locked the door.”

A few minutes later, a protester announced through a bullhorn that “a few of us are going to go up [to] knock on his door, we can maybe leave some signs, and we’ll leave a copy of [the] Constitution in the hopes that Sen. Hawley actually reads it … and he quits his dangerous attack on our democracy.”

As seen in the video posted online, three protesters then approached the front door.

“[T]he doorbell rang, and from downstairs, I could hear loud noises at the door: knocking, stomping, shouting, or some combination,” the senator’s wife wrote in her statement. “I went upstairs to see what was happening. … The protestors were screaming with bullhorns and shouting ‘Come out, come out!’ I was frightened.”

After about 12 minutes, an officer from the Vienna Police Department arrived on the scene and told the group that, under state law, it was “actually illegal” to picket in front of a home, according to the video. City ordinances also prohibit such use of bullhorns, a spokesman for the police department told ABC News.

The continued protesting for another 10 minutes, after they said a prayer and more officers arrived.

Hawley’s office provided ABC News with Erin Hawley’s statement, which it said was filed with the complaint.

In her statement, she said, in the wake of the protest, she’s now “fearful” for her family and that they have hired private security, especially after protesters “threatened to return in the early mornings or during the night.”

“[B]ased on a citizen, the magistrate issued a summons for a defendant for a violation of Virginia Code 18.2-419 (picketing or disrupting tranquility of home), a Class 3 misdemeanor,” the Vienna police spokesman told ABC News.

Young called any such claims “slanderous.”

On Jan. 4, the day of the protest, the ShutdownDC group posted a message online warning that Hawley’s “baseless” claims that the 2020 presidential election was stolen and that his efforts to stop Congress from certifying the results less than two days later would “add kindling to an already dangerous situation.”

The group said “many” of then-President Donald Trump’s supporters were threatening “to commit violence against” members of Congress and police during a rally in Washington on Jan. 6, when the election was to be certified.

After Hawley first said the protesters threatened his family, “vandalized” his home and “tried to pound open our door,” The Washington Post and other media outlets questioned the accuracy of those claims.

In response, Hawley on Twitter accused The Washington Post of “printing outright lies from the Antifa group who now describe themselves as sweet angels.”

“You screamed through bullhorns, shouted down my wife when she asked you to leave, vandalized property, pounded on our door, and terrorized neighbors,” Hawley tweeted. “You’re scum. And we won’t be intimidated.”

Hawley reiterated his account on Fox News, saying, “The whole point was to terrorize and to intimidate.”

According to a Hawley spokeswoman, the public controversy over the senator’s initial claims has sparked new safety concerns.

“Because of the attacks in the media and from the left over the past few weeks, Josh’s family has been the subject of numerous threats on their lives that are being monitored by authorities,” Hawley’s communications director, Kelli Ford, said in a statement to ABC News.

On the morning of Jan. 6, less than 48 hours after the protest at his home, Hawley arrived on Capitol Hill prepared to formally object to Joe Biden being certified as the next president.

After a violent pro-Trump mob stormed the Capitol, leaving five people dead and delaying the certification for several hours, Hawley was one of only a handful of senators to vote against certifying the Electoral College’s results.

Last week, the Department of Homeland Security issued a rare public bulletin, warning, “Information suggests that some ideologically motivated violent extremists with objections to … the presidential transition, as well as other perceived grievances fueled by false narratives, could continue to mobilize to incite or commit violence.”

The “heightened threat environment,” according to DHS, will persist for weeks.