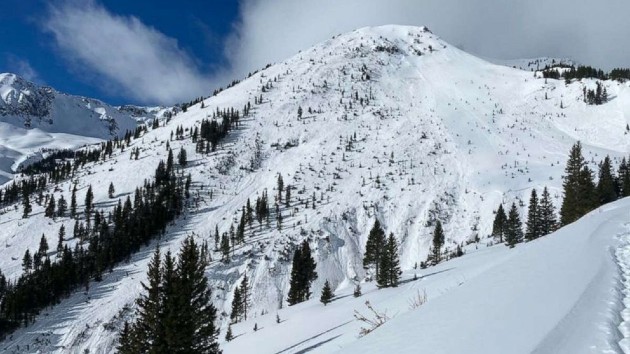 (NEW YORK) — Three skiers have been found dead after being hit by a “large avalanche” more than two miles above sea level when they accidentally triggered it while backcountry skiing.

The incident occurred on Feb. 1 between the towns of Silverton and Ophir in Colorado when a group of seven skiers was traveling near an area — locally known as “The Nose” — and, according to a report from the Colorado Avalanche Information Center (CAIC), they accidentally triggered a large avalanche at an elevation of approximately 11,500 feet.

Four people were caught up in the avalanche when they were carried and then buried by the tumbling ice and snow.

According to CAIC, the group of skiers was able to recover one of their missing members after digging them out. That individual suffered only minor injuries. Three other skiers are dead, according to San Juan County officials.

“… the families of Seth Bossung, Andy Jessen and Adam Palmer are allowing us to share their names so we can all openly acknowledge their deaths and grieve together,” Eagle County and the town of Eagle said in a joint statement Wednesday. “The families are surrounded by loved ones, and we are asking everyone to respect their wishes as to when and how they wish to communicate with others.”

The deceased skiers were located because they were wearing beacons, officials said. They were buried in more than 20 feet of avalanche debris.

The victims, according to San Juan County, have been recovered, but “due to the rugged terrain and avalanche debris, a helicopter retrieval of the three skiers is now required.”

That, officials said, will happen the next time weather allows the operation to continue. After the bodies are moved, the skiers will be transferred to the San Juan County Coroner’s office for positive identification.

Authorities were initially contacted and a search and rescue operations lasted into the night, said CAIC, and again continued on Feb. 2 before being suspended due to “considerable” avalanche danger as well as the safety of the search and rescue team.

“The avalanche danger in the Northern San Juan Mountain Zone is in ‘Considerable’ hazard and due to the unstable snowpack we are experiencing natural and mitigated avalanche activity,” said the Office of Emergency Management, San Juan County Colorado, in a statement on social media. “Increased avalanche activity caused hazardous conditions for the recovery mission. Therefore the recovery mission of the three missing skiers was suspended until the avalanche conditions are stable and first responders can re-enter the dangerous terrain of the avalanche accident site.”

“Avalanche danger in the backcountry is always unpredictable regardless of your avalanche knowledge and skills,” said the Office of Emergency Management, San Juan County, Colorado. “It is critical to check the avalanche forecast and avalanche danger prior to venturing into the backcountry. Check … for avalanche conditions, have your equipment of beacon, shovel, probe and make a plan for communications with your ski group.”

Serena Williams matches with daughter Olympia and her doll in adorable photo
Cheney not fighting, but not backing down in face of Trump, Republican backlash
Nashville officer shot while responding to ‘setup’ 911 call; suspect dead: Police
After viral “dad bod” pics, Will Smith says he’s getting in the ‘Best Shape of My Life’ on YouTube
Oscars producer confirms categories were moved in the event of a Chadwick Boseman win that didn’t happen
Michael B. Jordan teases Kilmonger’s potential return in ‘Black Panther’ sequel