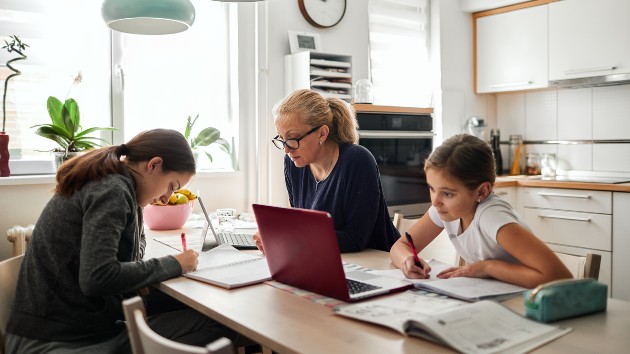 (NEW YORK) — Charlize Theron, Amy Schumer, Gabrielle Union and Eva Longoria are among a group of moms, including non-celebrities, calling on Congress and the Biden administration to offer more support for working moms amid the coronavirus pandemic.

The four actresses have signed onto a letter, seen last month in a full-page New York Times ad, urging President Joe Biden and Vice President Kamala Harris to create a “Marshall Plan for Moms,” that would provide a means-tested $2,400 monthly payment to moms and would be led by a “caregiving czar” tasked with implementing workplace benefits like parental leave, affordable child care and pay equity.

“So many moms I know today, we are reaching our breaking point, so we have an opportunity to rethink motherhood, to create equity and fairness and to value what is most important to us, which is America’s moms,” said Reshma Saujani, the founder and CEO of Girls Who Code and a mom of two who is leading the new Marshall Plan effort. “And so we need a 360-plan to get women back to work, to get mothers back to work.”

The 1940s-era Marshall Plan was a multibillion-dollar U.S. program that helped to rebuild the economies of Western Europe after World War II.

Advocates like Saujani say just as drastic and intentional an effort is needed today to help working moms, many of whom have seen their careers decimated by the coronavirus pandemic, leading experts to call this economic downturn a “shecession.”

More than two million women have left the labor force since February 2020, meaning they are neither working nor looking for work, according to the National Women’s Law Center, a policy-focused organization that fights for gender justice.

Since February 2020, women have lost over five million net jobs, and account for nearly 54% of overall net job losses since the start of the crisis. Men have lost a net 4.5 million jobs between February and November, making up 46% of total job losses, according to the NWLC.

Heather Boushey, a member of Biden’s Council of Economic Advisers, told ABC News that much of what is called for in the Marshall Plan for Moms is included in Biden’s $1.9 trillion COVID-19 relief proposal, the American Rescue Plan.

“These are bold steps that would make a significant difference in the lives of children and moms and dads,” Boushey said of the American Rescue Plan, adding there is also “certainly an appetite” in the Biden administration to take on the issues of paid family leave, affordable childcare and pay equity.

While the Marshall Plan for Moms calls on working mothers to receive a short-term monthly stipend, other advocates are calling on Congress to take gender out of the equation and offer a monthly stimulus check to child care providers, regardless of their gender.

“When women lose control of their finances, they lose control over their lives. A policy that financially encourages moms to stay on the sidelines disempowers them,” Samantha Ettus, founder and CEO of Park Place Payments, and Amy Nelson, founder and CEO of The Riveter, wrote in a recent Newsweek op-ed. “Conversely, a child care stipend will aid women’s participation in the economy, freeing them from the tethers of pandemic schooling, childcare and housework.”

As the pressure builds for help for working mothers, Biden is trying to move his $1.9 trillion COVID-19 relief proposal forward in Congress.

A group of 10 Republican senators have offered a competing proposal that calls for about $618 billion in federal spending.

Here is what the two proposed packages contain when it comes to benefits that could support working moms:

Biden’s American Rescue Plan calls for temporarily increasing the maximum child tax credit from $2,000 to $3,000 for each child aged 17 and under, and up to $3,600 for children under age 6.

Biden’s plan would also make the credit fully refundable for one year, whereas now it is only partially refundable.

“Currently, 27 million children live in families with household incomes low enough that they didn’t qualify for the full value of the Child Tax Credit, and this measure would give these children and their families additional needed resources,” the White House said about this provision of the plan.

The GOP plan does not include any changes to or additional funding for the child tax credit.

Neither of the current proposals call for stimulus payments specifically for mothers, as called for by the advocates behind the Marshall Plan for Moms.

Both plans do call for stimulus payments to all Americans depending on their income.

Of the 140,000 jobs in the U.S. economy that were lost in December, all of them were women’s jobs, U.S. employment figures show.

Biden’s plan proposes raising the weekly unemployment insurance benefit from $300 to $400 and extending it through September.

The Republican plan calls for extending unemployment insurance benefits through June and at the current $300 per week.

Women make up a majority of minimum wage workers and workers earning below minimum wage in the U.S., according to the Bureau of Labor Statistics.

The White House announced in January that Biden has called for an executive order within the first 100 days of his administration “that requires federal contractors to pay a $15 minimum wage and provide emergency paid leave to workers.”

The GOP senators’ plan does not address the federal minimum wage, nor does it address paid leave.

The United States is the only country among 41 industrialized nations that does not mandate paid leave, according to 2016 data from the Organization for Economic Cooperation and Development.

Just 21% of all private workers had access to paid family leave as of 2020, according to BLS.