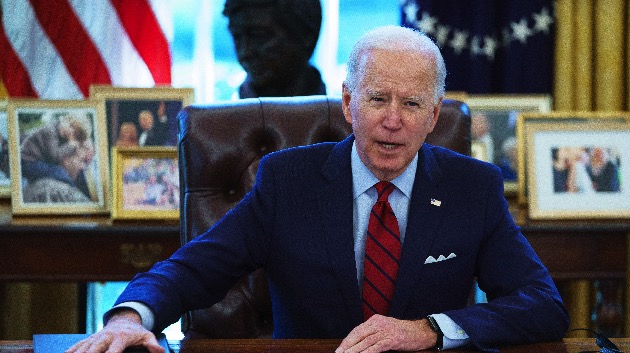 (WASHINGTON) — President Joe Biden said in an interview published Wednesday that it would be “farcical” if the Senate did not hold a trial for former President Donald Trump after the House voted last month to impeach him.

“He was impeached by the House, and it has to move forward, otherwise it would come off as farcical,” Biden said in the interview with People.

Forty-five Republican senators voted last week that it would be unconstitutional to hold an impeachment trial for a president no longer in office, short of the number needed to stop it from taking place in the Democrat-controlled Senate.

Convicting Trump on the article of impeachment, for allegedly inciting the Jan. 6 insurrection at the Capitol, would take two-thirds of senators, including at least 17 Republicans.

“It’s probably not likely to get 17 Republicans to change their view and convict an impeachment,” Biden said. “But I think it’s important that there be certain basic standards, that people at least are able to see what happened to make their own judgments. I’m not looking for any retribution.”

Ten GOP members of Congress joined all House Democrats to vote to impeach Trump on Jan. 13.

Biden has generally remained quiet on impeachment developments in recent weeks, choosing to focus publicly on his push for a new round of COVID-19 relief legislation and a series of executive actions he’s taken on a variety of issues.

Early last week, he said in a brief interview with CNN that he thought the trial “has to happen” and that there would be “a worse effect if it didn’t happen.”

“I was responding to the question, should in a sense the trial go forward?” Biden told People, explaining his response to CNN. “To say now, ‘No,’ after — I don’t think that’s — it makes a mockery of the system.”