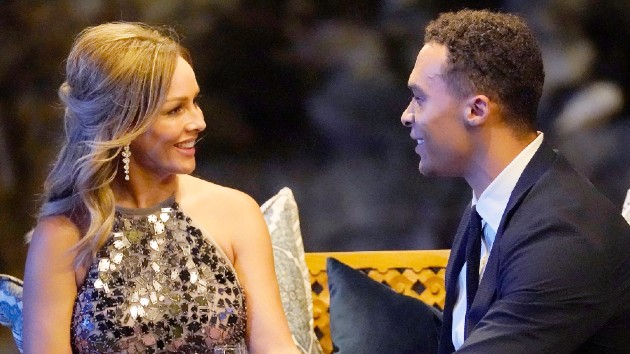 Moss, 32, first broke the news January 19 that he and Crawley, 39, were no longer together.  A few days later, the former Bachelorette inferred that she was blindsided by the reveal and needed some time to “really digest this.”

A week after the bombshell announcement, the two said they are healing from the heartbreak.

In an Instagram live video posted Saturday, Clare spoke openly with fans about how she is trying to bounce back from the fallout, admitting, “I was struggling pretty bad and I held it in for a long time and I think in manifested in other ways and kind of built up and was just heavy and a lot.”

“I’m getting to the point now where I’m trying really hard to come back from that and make a U-turn because it’s a dark place to be in when you’ve got a lot of stuff compiled on each other,” she added while fighting through tears.

The reality star says that she is practicing gratitude every day and is reaching out to her family to help her heal.

On the flip side, Moss told his followers that breaking off the engagement has “wrecked” him.

Also taking to Instagram live on Saturday, the former NFL star tearfully revealed, “This has f****** rocked me. I felt so many emotions, so much guilt, but also so much confusion, so much hurt.”

Moss added that he is “looking for answers” while trying to heal, explaining, “My pops would always say you gotta hurt before you heal.”

The former couple met and became engaged on season 16 of The Bachelorette.

Critics say TSA is understaffed and ill-equipped for pipeline security mission
Critics on left and right bash Biden’s response to Israel-Gaza violence
The “‘Bridgerton’-verse” is expanding: New spin-off to center on the origins of Queen Charlotte
US facing ‘complex and volatile’ threats from domestic extremism: DHS
Mom gets outpouring of love from Twitter after revealing she has to tell her son she is dying
More than 250 correctional officers died from COVID-19