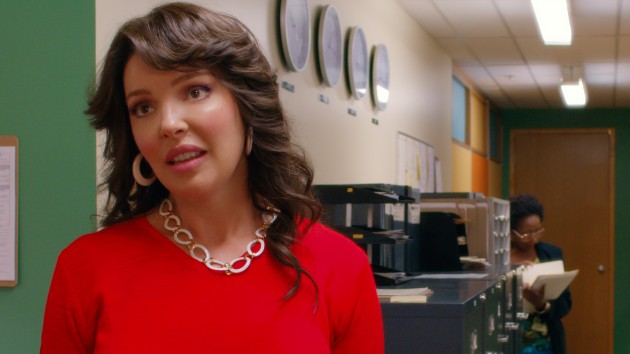 (LOS ANGELES) — (NOTE LANGUAGE) Katherine Heigl may have left Grey’s Anatomy years ago, but that didn’t stop her from offering up her opinion on the show’s shocking twist involving Alex and Izzie.

The shocking twist being referred to here is the season 16 reveal that Justin Chambers’ character Alex left Seattle and his wife, Jo, to be with his former flame, Izzie Stevens, which is the character Heigl portrayed while appearing on the ABC medical drama.

Speaking with Entertainment Tonight, the 42-year-old actress revealed that she hadn’t seen the episode, which aired on March 5, 2020.

“I didn’t see it,” she admitted before being brought up to speed on what happened.

“Wasn’t he with someone?,” she then asked before adding, “Listen, isn’t that an a**hole move?”

Heigl appeared on Grey’s Anatomy as Izzie for six seasons from 2005 until 2010. Currently, the show is airing its seventeenth season, which has seen the return of past stars like Patrick Dempsey and T.R. Knight, but it doesn’t seem that fans should expect her to join them.

When asked if she would make a cameo, Heigl explained that she’s “super focused” on her new show Firefly Lane.

“I would never say never,” she teased, but quickly stated that “it’s not likely.” Given how she left the show — amid a flood of bad blood, criticizing the writing staff on the Shonda Rhimes-created hit — it’s safe to say she’s probably right.

In a 2014 interview with The Hollywood Reporter, Rhimes said of her shows: “I don’t put up with bulls**t or nasty people, I don’t have time for it.” She added that there were “no Heigls” working on her current shows, which also included Scandal and How to Get Away with Murder.