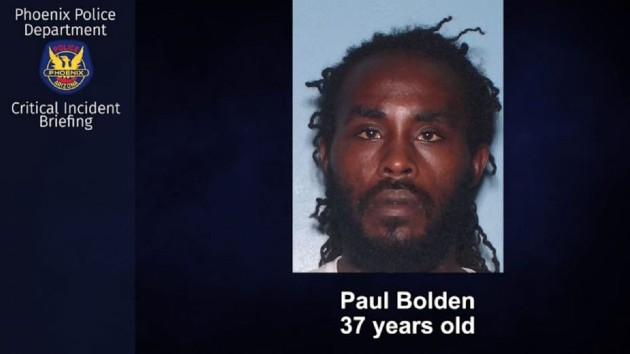 (PHOENIX) — The Phoenix Police Department released video taken earlier this month of a fatal shooting between police officers and a man who allegedly took a baby hostage.

The deadly confrontation occurred Jan. 9 after police were called to a motel, where surveillance video recorded the man, identified as 37-year-old Paul Bolden, wrestling with a woman over the baby in the parking lot.

Multiple onlookers called 911, including one who said Bolden was firing a gun at people and holding a baby hostage, the Phoenix Police Department said in a press briefing of the video.

Police said the second call to 911 was from a woman who reported her husband had taken her baby and was shooting a gun. Others said the man had walked out into the street, stopped a car, and held the driver at gunpoint.

Officers arrived within a minute of the 911 calls, and said they saw Bolden shooting a gun while holding the baby. Bolden was shot after refusing the officers’ demands to drop the gun, when an officer saw him point it at the baby and other people nearby, police said.

Bolden was injured from the incident and an officer immediately recovered the baby to safety. The baby was not injured during the incident, according to police.

Following the shooting, Bolden was transported to a hospital where he was pronounced dead, according to the Phoenix Fire Department.

Investigators later learned that the woman wrestling with Bolden was his girlfriend and that the baby was his son.

According to the press release, no officers were injured in the shooting and some bystanders suffered only minor injuries.

Woman shot with rubber bullet at protest said she’s not surprised to see officer exonerated
Asian man stabbed in back in Chinatown, suspect charged with attempted murder as a hate crime
Asian man stabbed in back in New York City’s Chinatown, suspect arrested
ABC News’ Linsey Davis on “savoring” special moments of motherhood with her third children’s book, ‘Stay This Way Forever’
Secretary of State making his first ‘trips’ to Mexico and Canada — virtually
US refugee agency for children at risk of maxing out capacity