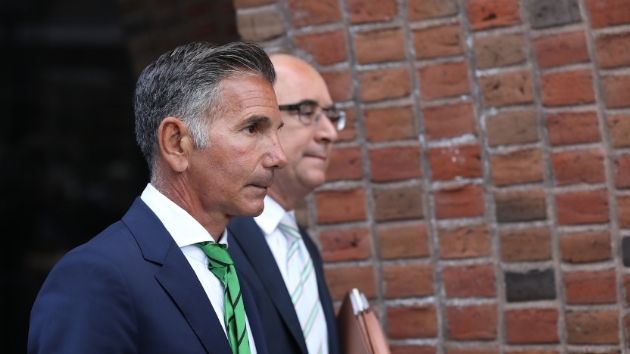 (LOS ANGELES) — A judge has rejected fashion mogul Mossimo Giannulli’s request to serve the remainder of his five-month prison sentence under house arrest.

Entertainment Tonight reports that a judge rejected the fashion designer’s request, but left the door open for him to file a renewed motion or a prison warden to intervene if “extenuating circumstances occur in the future.”

The court documents, obtained by ET, state Giannulli served 56 days in solitary quarantine when he filed his request to the judge. His lawyers had argued the conditions of his sentence were “far more extreme than what the court recommended,” adding he was confined to a small cell 24/7 and only granted three 20 minute breaks a day.

His team had hoped he was eligible for release due to COVID-19 regulations that allow certain prisoners to be released to home confinement to help reduce California’s prison population.

Giannulli’s legal team hoped his age and that he is non-violent offender who has no prior criminal record would make him a prime candidate.

His prison sentence is set to expire April 17. Giannulli will also have to pay a quarter-million dollar fine and satisfy 250 hours of community service, on top of undergoing two years supervised release.

As previously reported, Giannulli and wife Lori Laughlin pleaded guilty on May 22 of last year to playing a role in the Varsity Blues college admissions cheating scheme by paying $500,000 to get their two daughters into the University of Southern California as crew recruits when neither child participated in the sport.

Both sentenced to prison on conspiracy charges.  Loughlin already satisfied her sentence and was released on December 28.