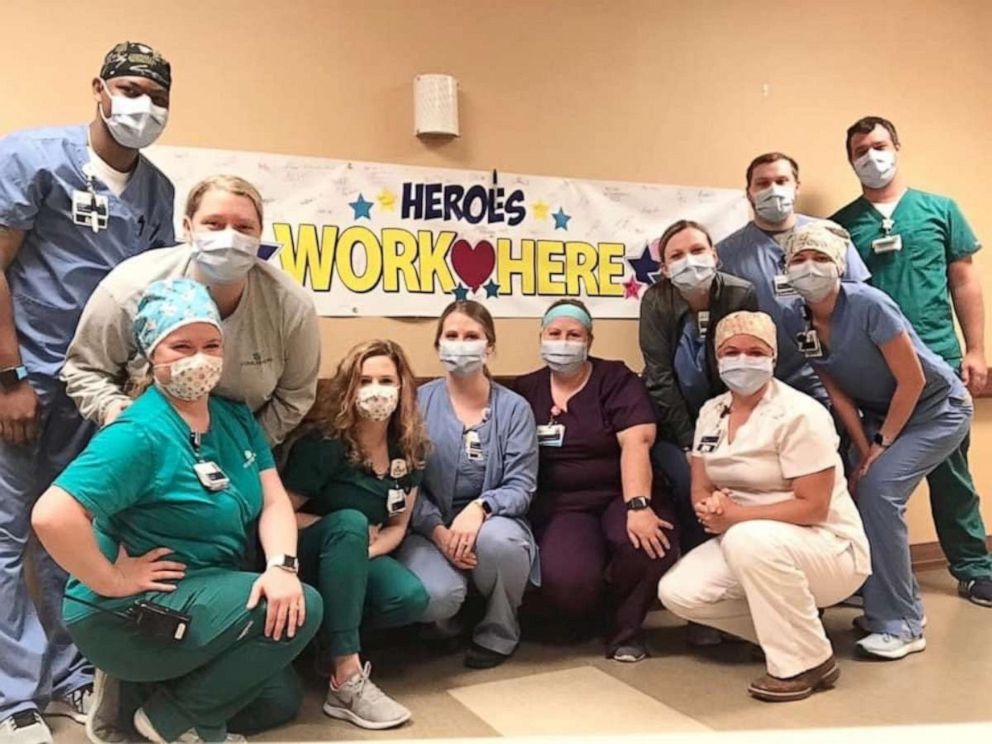 (GREENSBORO, N.C.) — A health care worker who lost everything in a fire is now thanking her hospital colleagues for helping her family during these hard times.

Amanda Rhoney, a nursing assistant and secretary in Wesley Long Hospital’s emergency department in Greensboro, North Carolina, was working the evening of Jan. 24 when her 10-year-old daughter Gentry called her with devastating news.

“All I could hear on the other line was her screaming that the house was on fire,” Rhoney told “Good Morning America.” “She kept saying, ‘He’s trapped in there.’ … She was talking about one of the dogs that my husband was trying to get out. My mind went to the worst possible place thinking that my husband was trapped.”

Rhoney said her husband Michael, a military veteran, was making dinner on the grill for himself, Gentry and son Mychal, 6, when the propane tank apparently caught fire, engulfing their home in flames.

No one was injured in the fire, though one of the family’s two dogs did lose consciousness from smoke inhalation. The husky recovered after Thomasville Fire and Rescue administered oxygen to the pup, Rhoney said.

“This lucky pup will live to see another day thanks to the quick work of our firefighters during a structure fire tonight,” the fire department wrote in a Facebook post about Rhoney’s dog.

Rhoney said everything was lost in the blaze including household items, school supplies and clothing. She and her family are now staying at a hotel.

Rhoney posted an update for her concerned colleagues in a private Facebook group and Joy Ingram, an emergency medical technician, stepped in.

Ingram, who’s worked with Rhoney for roughly a decade, told “GMA” that she was on the same shift with Rhoney when the call came in about the house fire.

“In the middle of a pandemic this girl has been working so hard and she actually had COVID and recovered from that. … Then [to] have her house completely destroyed, my heart went out,” Ingram said. “Everybody’s hearts went out.”

Ingram started collecting donations via GoFundMe, and also asked for people to drop clothing or household items at the hospital’s emergency department.

“They’re starting from scratch,” Ingram said. “Amanda will give you the shirt off of her back. She will do anything for you within her means and if she can’t do it, she will find someone that can. She herself has a giving heart and as a coworker she’s just phenomenal.”

Rhoney said the generosity from her hospital family and the community has been positively overwhelming.

“It’s definitely made it a whole lot easier to process,” she added. “Just a huge thank you to everyone who donated and who called to check on us.”

The Rhoneys also expect to receive help from Off-Road Outreach — an organization created to assist displaced veterans like Michael Rhoney and his family.