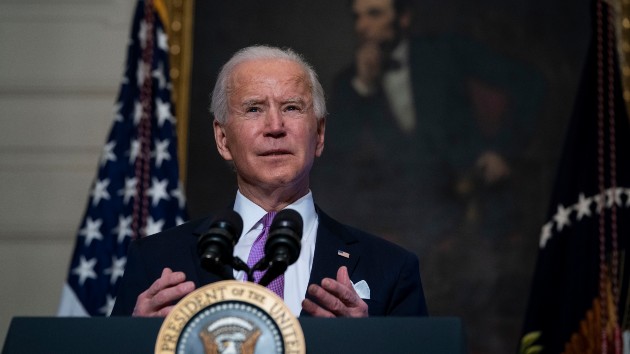 (WASHINGTON) — This is Day 8 of the administration of President Joe Biden and Vice President Kamala Harris.

Secretary of State Antony Blinken, reporting for work at the State Department, told the agency’s 70,000 employees around the world, “I will have your back.”

Blinken recalled how his career began at the State Department 28 years ago as a special assistant. He last served in the department four years ago as its deputy secretary in the Obama administration and acknowledged the changes the agency and the world have undergone since.

“To date, the pandemic has claimed the lives of five State Department Americans and 42 locally employed staff around the world,” Blinken said. “And outside our doors, our government buildings are surrounded by new barricades. We’ve never been in a moment quite like this before.”

He went on to pledge to be an inclusive, transparent and morale-building boss, arguing, “We at State have a role to play in all of this.”

Blinken also vowed to invest in building a diverse and inclusive agency that is “truly representative of the American people.”

He said, “the world is watching us intently right now” to see “if we can heal our nation,” but, in a nod to the appeal of the Trump administration’s more isolationist approach, Blinken noted that the department must work first for the American people, saying the public wants to see “that our foreign policy is about them and their lives.”

With the second impeachment trial of former President Donald Trump slated to formally begin in two weeks, Sen. Rand Paul, R-Ky., forced a procedural vote on the constitutionality of trying a former president on Tuesday and was met with the support of 45 Republicans — just three weeks after the Capitol, including the Senate chamber, was invaded. Though anything could happen at trial, the vote signals Democrats will not have the numbers to convict Trump and bar him from holding future federal office.

The idea behind delaying Trump’s trial to Feb. 9, an agreement reached by party leaders, was reached so that the Senate could work on Biden’s Cabinet confirmations and COVID-19 relief while the House impeachment managers and Trump’s defense team prepare.

On the Cabinet front, Biden meets his one-week anniversary in office with four Cabinet officials confirmed — lagging behind other administrations in recent history. On Wednesday, confirmation hearings will be held for Jennifer Granholm for the energy secretary, Linda Thomas-Greenfield at U.N. ambassador, and Denis McDonough to lead the Department of Veterans Affairs.

The president on Wednesday will turn his attention to the climate crisis with a suite of new executive actions — making tackling climate change a priority across the federal government.

Biden, who has already revoked a permit for the controversial Keystone XL pipeline project and moved to rejoin the Paris Agreement on climate, is scheduled to deliver afternoon remarks and sign executive actions at 1:30 p.m., fulfilling campaign promises such as freezing new oil and gas leasing on federal land and kicking off his ambitious agenda to reduce greenhouse gas emissions.

On his one-week anniversary as president, Biden will turn his attention to the climate crisis with a suite of new executive actions Wednesday.

The president, who has already revoked a permit for the controversial Keystone XL pipeline project, will deliver remarks and sign executive actions on tackling climate change, creating jobs and restoring scientific integrity from the White House’s State Dining Room on Tuesday afternoon.