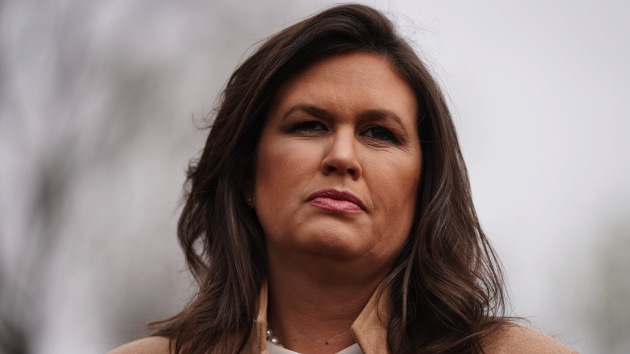 (NEW YORK) — Former Trump White House press secretary Sarah Huckabee Sanders has officially announced she’s running for governor of Arkansas in 2022 — in what’s slated to become one of the first tests of how much influence former President Donald Trump maintains over the Republican Party versus the GOP establishment.

Sanders announced her run in a nearly eight-minute-long campaign video posted to her Twitter feed Monday morning, appearing to target disgruntled Trump supporters in her pitch.

“Everything we love about America is at stake. With the radical left now in control of Washington, your governor is your last line of defense. In fact, your governor must be on the front line. So today, I announced my candidacy for governor of Arkansas and ask for your prayers and your support,” she said.

Sanders touted her tenure in the Trump administration and listed a few campaign promises throughout the video, including prohibiting sanctuary cities, expanding school choice, lowering income taxes and fighting back against “radical left” environmental policies like the Green New Deal.

“I took on the media, the radical left and their ‘cancel culture,’ and I won. As governor, I will be your voice, and never let them silence you,” Sanders added in the announcement.

Sanders, a loyalist of Trump’s since leaving the administration, is vying for the position her father, Mike Huckabee, held from 1996 to 2007.

When Sanders succeeded Sean Spicer as White House press secretary in 2017, she was only the third woman to serve in the position and did so for nearly two years — with her tenure marked by a combative relationship with the press.

She frequently spread disinformation to defend the Trump administration and admitted to federal investigators that she had made false statements to the public as press secretary while interviewed by the Mueller Special Counsel investigation, calling it a “‘slip of the tongue,"” the Mueller report said.

Sanders left the White House to return to her home state, Trump announced in June 2019 in a tweet, saying, “I hope she decides to run for Governor of Arkansas – she would be fantastic.” She has since written a book about her tenure. Prior to serving as press secretary, Sanders worked as a senior adviser on Trump’s presidential campaign after managing her father’s failed bid.

She enters a crowded field with Arkansas Lt. Gov. Tim Griffin — considered by many the GOP establishment candidate — already in the running along with Attorney General Leslie Rutledge, both Republicans. Since leaving the White House, she’s laid the groundwork for a run by meeting with GOP groups across the solidly red state.

Current Republican Gov. Asa Hutchinson is barred by term limits from seeking re-election next year. No Democrats have announced a run for the seat.

With the backing of the former president, Sanders is seen as a leader in the polls — but that backing came before the Jan. 6 siege on Capitol Hill. Now, as the Republican Party is facing a break in leadership with Democrats controlling Congress and Trump facing an impeachment trial in the Senate — the only former president in the position — Sanders’ race will be one of the first indicators of Trump’s staying power in the future of the Republican Party.

Sanders is the youngest child and only daughter of the former Republican governor of Arkansas.

She was born in Hope, Arkansas, the same town as former President Bill Clinton, who also served as a Democratic governor of Arkansas.