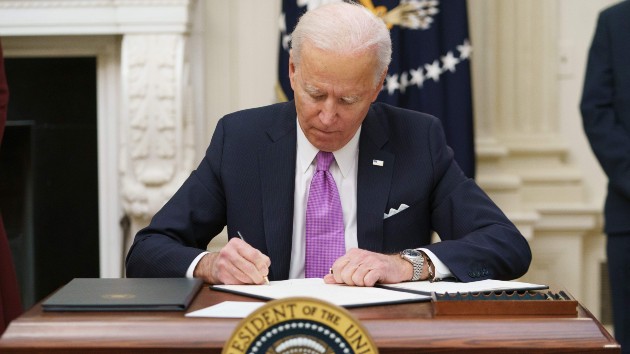 (WASHINGTON) — President Joe Biden is set to sign a “Made in America” executive order Monday, fulfilling a long-time campaign promise to increase the amount of federal spending that goes to American companies.

The announcement comes at a time when the government is set to spend expansively on efforts to defeat COVID-19, and after a period during which vulnerabilities in the U.S. supply chain were exposed as state and local governments resorted to foreign manufacturers to obtain desperately-needed personal protective equipment.

The federal government spends about $600 billion on contracting per year, and there are already rules in place governing how taxpayer dollars can be spent, how much foreign products can be purchased, and how many foreign components can be brought to the U.S. and assembled here. However, waivers and loopholes allow even more foreign product to be purchased than the rules state.

Biden’s executive order will aim to close those loopholes and cut down on the waivers, as well as order an increase in domestic content. It will also redefine what can count as domestic content, create a public website so U.S. companies can more easily see government contract business and determine whether they could make a more competitive bid for it.

The executive order will also create a new senior role at the Office of Management and Budget to oversee the implementation of these new efforts.

“The goal is to make sure that companies can’t undermine or get around the purpose of the Made in America rules by importing largely foreign made products, making modest changes or tweaks on shore that add little value for American workers or American industry, don’t actually utilize America’s manufacturing capabilities, and will also close loopholes so that content rules drive new opportunities for American businesses and workers,” a senior administration official said on a call with reporters.

President Donald Trump also signed an executive order in April 2017 instructing the government to review federal contracts and minimize waivers to “Buy American” requirements. But the Trump administration did not significantly increase purchases of U.S.-made goods, and a senior Biden administration official criticized the failure.

“… when you look at the outcome, there was no real material change in either the way in which domestic content was measured, the stringency of the domestic content requirements, or the utilization of waivers to the Buy America provisions. So, you know, in practice, nothing happened,” the official said.

Much of Biden’s executive order closely echoes the “Buy American” portion of his Build Back Better policy launched during the general election campaign. Biden pledged to crack down on false advertising on made in America products, use of waivers and sought to support small businesses in particular to apply for contracts for procurement needs.

When pressed, however, for a specific target increase in U.S.-made purchasing the administration is hoping to achieve, administration officials did not yet have an answer. It’s up to the Foreign Acquisition Regulation Council to determine how much foreign content is allowable, and how much domestic purchasing is mandatory.

The Biden administration is pitching the “Buy American” plan as an effort to not only help U.S. businesses during the pandemic, but to begin addressing structural inequality in our economy.

“[Monday], he’s going to take a major step toward his goal of rebuilding the backbone of America, manufacturing, unions and the middle class, and it’s based on his that, making sure that we are making things in America and all of America is core to our economic strategy,” a senior administration official said.

What are NFTs? Everything you need to know about non-fungible tokens
Tiger on loose in Houston for nearly a week moved to animal sanctuary
Rep. Liz Cheney criticizes ‘disgraceful’ GOP attempts to ‘whitewash’ Capitol attack
Tiger seen in Houston neighborhood found after week of searching, legal wrangling
Former NBA champion Ben Wallace to be inducted in 2021 Basketball Hall of Fame
Toddler found dead on Dallas residential street in apparent murder