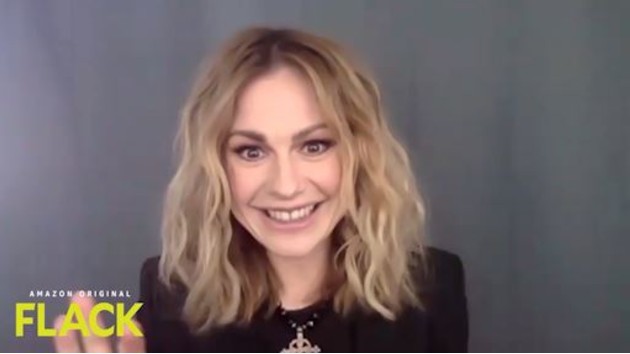 (NEW YORK) — In the first preview of the show Flack, now streaming on Amazon Prime, Anna Paquin’s character, Robyn, is literally holding the hand of an unseen scandal-plagued celebrity, leading him from shower to bedroom to limo to get him to look halfway presentable for a post-bender award show appearance.

It’s all in a day’s work for her character, and for many so-called flacks whose mission is to keep their famous clients out of the scandal pages.

While its star and producer is herself a famous, Oscar winning celeb, Paquin says a rep possessing such skills would be lost on her.

“Of course, I am exposed to, familiar with that side of the business, but I’m kind of a bit of a nerdy actressy actress, so that has not been my experience of the PR world,” the former True Blood star tells ABC Audio, with a laugh.  “Because I’m just a bit too boring.”

She adds, “I do really enjoy peeling back the curtains on things that people think they know stuff about and showing them how it really works.”

Paquin says she was “so lucky” to get her show’s cast, adding choices like Lydia Wilson, Genevieve Angelson and Sophie Okonedo, who plays her calculating boss Caroline, were automatic. It was like, “There she is! That’s the person,” Paquin enthuses.

Of Okonedo, Anna says, “She’s lovely. She’s delightful… But when she steps into Caroline: zero acting required for many of us gals because she’s terrifying!”