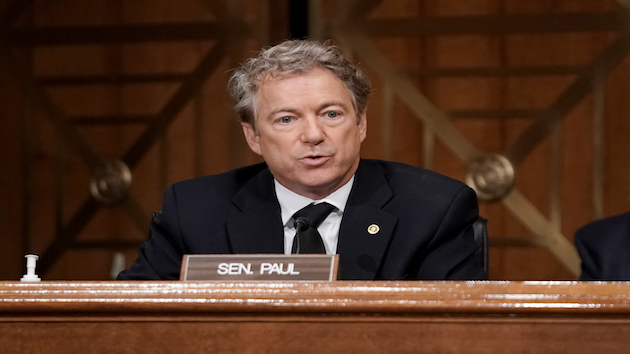 (WASHINGTON) — Days after President Joe Biden took office and the Democrats took control of the U.S. Senate, Sen. Rand Paul, R-Ky., would not unequivocally say Sunday that the 2020 presidential election was not stolen and called for an investigation of fraud, without providing evidence.

“The debate over whether or not there was fraud should occur, we never had any presentation in court where we actually looked at the evidence. Most of the cases were thrown out for lack of standing, which is a procedural way of not actually hearing the question,” Paul said on ABC’s “This Week.”

“Sen. Paul, I have to stop you there,” ABC News Chief Anchor George Stephanopoulos interjected.

“No election is perfect,” Stephanopoulos continued, through interruptions by Paul. “After investigations, counts and recounts, the Department of Justice — led by (Trump-appointed Attorney General) William Barr — said there’s no widespread evidence of fraud. Can’t you just say the words: ‘This election was not stolen?"”

Paul responded, “What I would suggest is that if we want greater confidence in our elections — and 75% of Republicans agree with me — is that we do need to look at election integrity.”

He also did not acknowledge former President Donald Trump’s role in sowing doubts about the election.

The majority of the court cases filed by the Trump campaign were thrown out due to lack of evidence. Across the country, secretaries of state, both Republican and Democrat, and federal officials — including Barr — have all said that there was no evidence of widespread fraud or security concerns in November’s election.

When challenged by Stephanopoulos on Barr’s denial of widespread fraud, Paul pushed back.

“He said that, yes. That was a pronouncement. There’s been no examination — thorough examination — of all the states to see what problems we had and see if they could fix them,” he said.

“There were lots of problems and there were secretaries of state, who illegally changed the law and that needs to be fixed, and I’m going to work harder to fix it and I will not be cowed by people saying ‘oh, you’re a liar,"” Paul told Stephanopoulos.

Stephanopoulos responded, “I’m standing by facts. There are not two sides to facts. I did not say this was a perfect election, I said the results were certified, I said it was not stolen. It is a lie.”

While Paul was one of the many Republican politicians who repeated Trump’s unfounded allegations of voter fraud, the Kentucky senator did not object to the certification of the electoral college and has said previously that he thinks Congress should not overturn results.

“Now, let me say to be clear, I voted to certify the state electors because I think it would be wrong for Congress to overturn that,” he said.

Sen. Amy Klobuchar, D-Minn., responded to Paul’s remarks in a separate interview on “This Week.”

“As I listened to Rand Paul, George, I just kept thinking, ‘man, this is why Joe Biden won,"” she told Stephanopoulos.

“American people right now are struggling. They need pandemic relief,” Klobuchar continued. “I thoroughly believe that we can handle this impeachment trial and — just as the American people are doing — juggle what we need to get done.

With less than a week since Biden’s swearing in, the article of impeachment against Trump is set to be delivered to the Senate Monday and the trial is expected to begin the week of Feb. 8. Senate Democrats are trying to balance the upcoming proceedings with getting more of Biden’s Cabinet picks approved and pushing forward on the president’s legislative agenda.

Despite earlier reports that McConnell was pleased with the House of Representatives’ impeachment efforts, a growing number of conservative legal experts and Republicans in the Senate have challenged the constitutionality of holding a trial for Trump since he is no longer in office.

Some senators, including Paul, have argued that if Chief Justice John Roberts does not preside over the impeachment trial — which remains unclear — the hearings would be illegitimate.

When challenged by Stephanopoulos about those process arguments, Klobuchar said, “It is constitutional. We have precedent from way back when a secretary of war was tried after he had left office and, obviously, there’s a remedy that would help in the future which would ban former President Trump from running again.”

With more Republicans touting the lack of constitutional basis for the trial, Stephanopoulos also pressed Klobuchar about whether there were enough GOP senators to vote to convict Trump.

“My colleagues have not yet committed about what they’re going to do and the news we just got out of The New York Times yesterday that the president was actually actively trying to take out his own attorney general and put in an unknown bureaucrat conspiring with him. I think we’re going to get more and more evidence over the next few weeks as if it’s not enough that he’s sent an angry mob down the Mall to invade the Capitol — didn’t try to stop it — and a police officer was killed. I don’t really know what else you need to know,” the Minnesota senator added.

“Would you pursue, instead, either a censure or some kind of a resolution under the 14th Amendment to prevent President Trump from running for office again?” Stephanopoulos asked.

Klobuchar refused to rule anything out.

“We’re focused on impeachment, but there are many options. Things can be looked at. But I think the thing that your viewers need to know right now, George, is that we must do many things at once,” she said.

While the Senate debates the impending impeachment trial, also critical on the Democrats’ agenda is passing a new coronavirus relief bill — a key component of Biden’s legislative priorities. The president is still pushing for a bipartisan arrangement, despite the fact that many in the GOP — including moderates like Sen. Susan Collins, R-Maine — have said that the overall $1.9 trillion price tag is too expensive.

Klobuchar pushed back against arguments over the size of the bill, saying “the amount that Joe Biden has proposed, that’s exactly the numbers we were talking about last summer. And at some point, the (Trump) administration was talking those numbers.”