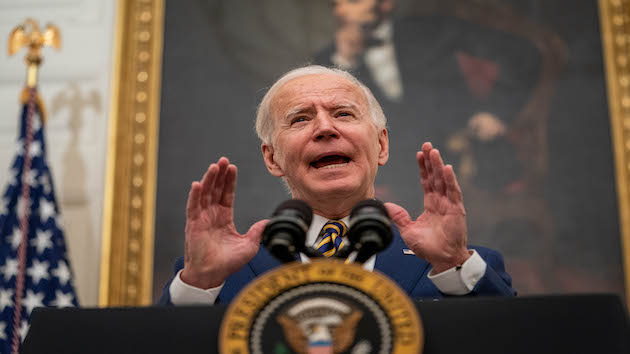 (LONDON) — President Joe Biden is held in high regard by most Americans, according to a new ABC News/Ipsos poll released Sunday, as he takes the reins of a divided country in the midst of a once-in-a-century pandemic and economic crisis.

In his first week in the Oval Office, Biden yielded high approval ratings for his response to the coronavirus (69%) and confidence in his ability to unify the country (57%). The new poll was conducted by Ipsos in partnership with ABC News using Ipsos’ Knowledge Panel.

In a recent ABC News/Washington Post poll, Biden’s score for handling the transition landed at 67%, nearly 30 points higher than his predecessor just before his inauguration.

Trump’s lackluster marks broke with the pattern for newly elected presidents, who usually enjoy high approval ratings in their first months in office.

For Biden, starting his tenure as commander-in-chief in a honeymoon period might afford him more room to maneuver on policy, particularly on his administration’s colossal challenge: COVID-19.

The more than two-thirds of Americans who approve of his leadership on the coronavirus includes 40% of Republicans — a notably high level of support from across the aisle a year into the pandemic. An overwhelming 97% of Democrats and 70% of independents also back Biden’s management of the crisis in his early days in office.

The highest approval Trump received for his handling of the virus was in mid-March last year, when 55% of Americans approved of his response, including 30% of Democrats. But for virtually all of the pandemic, Trump was underwater with the American public on his handling of COVID-19.

As Biden faces a collection of crises, starting with the nation’s war against the coronavirus, he signed an executive order on his first day in office that implemented a mask mandate and social distancing requirements in federal buildings and on federal land. The order is backed by more than 8 in 10 Americans in the poll (81%), as well as almost all Democrats (99%), and majorities of Republicans (59%) and independents (83%).

Americans are a bit more wary of Biden’s ability to make effective progress on his signature campaign promise: to unify a splintered nation.

As part of the survey, respondents were shown a video excerpt of Biden’s inaugural address, in which the newly sworn-in president invoked a familiar theme from his campaign that focused on mending a deeply fractured nation.

“We can see each other not as adversaries, but as neighbors. We can treat each other with dignity and respect. We can join forces, stop the shouting and lower the temperature. For without unity, there is no peace — only bitterness and fury. No progress — only exhausting outrage. No nation — only a state of chaos,” Biden said. “This is our historic moment of crisis and challenge. And unity is the path forward. And we must meet this moment as the United States of America.”

While 71% of those who viewed the video clip believed Biden’s rhetoric was convincing, in contrast, just over 1 in 5 Americans (22%) have a great deal of confidence in the president’s ability to actually unify the country. Nearly one-quarter (24%) are deeply skeptical of Biden’s capacity to bring the country together.

On Day One, the president rolled out a first slate of executive actions — charting his own course with policy steps that clear majorities of Americans back in the poll. But there is some variance in the level of support for each one.

Some of the dividing lines that could potentially imperil Biden’s agenda are forming around specific policy goals that overlap with issues Trump touted during his campaign and four years in office.

The potentially most fraught terrain for Biden to find common ground on is the issue of immigration, in which support for the directives addressing the Trump-era Muslim ban and the border wall plummet among Republicans.

While more than half of Americans support reversing certain moves by the former president — including the travel ban that targeted Muslim and African countries (55%), the construction of a wall at the southern border (55%), the exclusion of noncitizens from the U.S. Census (56%) and an effort to dismantle the Deferred Action for Childhood Arrivals, or DACA, program (65%) — Republicans are sharply opposed to such actions.

More than 3 in 4 Republicans oppose Biden’s executive orders to reverse the Muslim ban (78%), end the national emergency declaration at the U.S. southern border to stop construction of the wall (87%) and exclude noncitizens from the Census count (81%). Nearly two-thirds (66%) are against extending DACA.

After Trump withdrew from the Paris climate accords and cut ties with the World Health Organization, roughly one-third of the country opposes Biden’s decision to recommit to the climate agreement and rejoin the global health agency, driven by steepened Republican opposition. About 6 in 10 Republicans (61%) are against returning to WHO, and 72% are opposed to signing onto the Paris Agreement again.

But for broader actions by the newly installed Democratic administration targeting social justice and workplace discrimination, support is more widespread and bipartisan.

Roughly 8 in 10 Americans back Biden’s directives prohibiting discrimination in the workplace based on sexual orientation and gender identity (83%) and creating a government-wide approach to equity, civil rights, racial justice and equal opportunity (77%). That includes 64% and 52% of Republicans, respectively.

This ABC News/Ipsos poll was conducted by Ipsos Public Affairs’ KnowledgePanel® Jan. 22 to 23, 2021, in English and Spanish, among a random national sample of 504 adults. Results have a margin of sampling error of 5.0 points, including the design effect. Partisan divisions are 31%-26%-36%, Democrats-Republicans-independents. See the poll’s topline results and details on the methodology here.