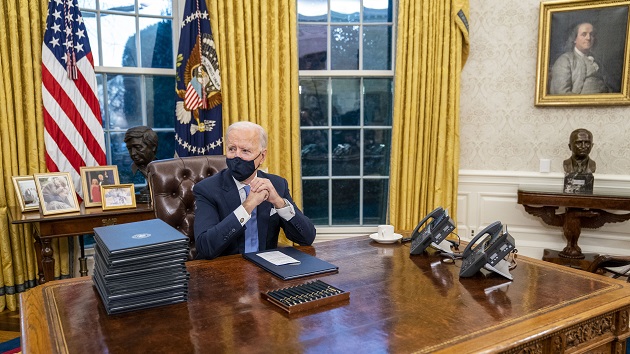 (WASHINGTON) — Not long after he was inaugurated, President Donald Trump had a portrait of the populist and controversial President Andrew Jackson placed prominently in the Oval Office, looking down as he held photo ops, signed sweeping executive orders and sparred with reporters.

But that painting of Jackson has been replaced.

Now, next to President Joe Biden as he sits at the Resolute desk is a portrait of one of America’s founders, Benjamin Franklin.

“It was important for President Biden to walk into an Oval that looked like America and started to show the landscape of who he is going to be as president,” Ashley Williams, the deputy director of Oval Office operations, told the Washington Post.

The busts of King and Kennedy, who Biden on the campaign trail called his political heroes, are in his direct view on either side of the Oval Office fireplace.

The Chavez bust sits among photos of Biden’s family, including one of his beloved late son, Beau, on a table behind him.

Chavez’ son, Paul Chavez, told the Associated Press that when he agreed to lend the bust to the president, he didn’t know where it would end up. Seeing it placed so noticeably behind Biden, Chavez said, “we’re still smiling cheek to cheek.”

Franklin’s portrait is said to be a nod to his respect for science.

A large portrait of President Franklin D. Roosevelt, who also came into office during a time of economic hardship during the Great Depression, hangs right across the room as Biden sits at the Resolute desk.

Portraits of Abraham Lincoln and George Washington also look on from the Oval Office walls.

Biden paired the portraits of Jefferson and Hamilton, his office told the Washington Post as “hallmarks of how differences of opinion, expressed within the guardrails of the Republic, are essential to democracy.”