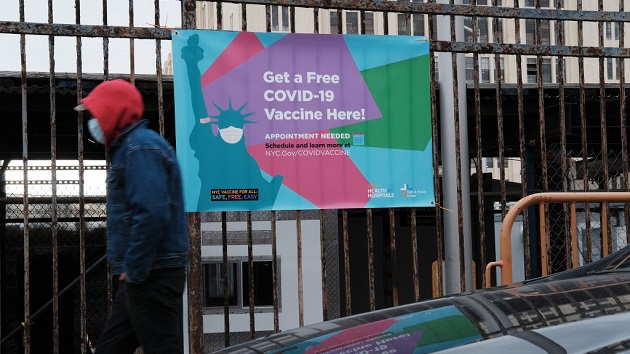 (NEW YORK) — Governors and state health officials are facing a frustrating reality as they try to make more people eligible to get the COVID-19 vaccine: They can vaccinate only as many people as there are doses and the supply is falling short of demand.

“We can’t give you a vaccine shot if we don’t have the vaccines can we? We just can’t,” West Virginia GOP Gov. Jim Justice said Thursday, calling the situation “unacceptable.”

Health experts say speeding up vaccinations is critical to stopping the rapid spread of the virus, especially before new variants make the crisis worse.

“The amount of vaccine that comes into the state and is available to put into people’s arms is solely a federal solution,” Minnesota Democratic Gov. Tony Evers said.

“It’s my hope that the president does everything in his power to increase production,” he said. “If we want to do this as quickly as possible, we need to have more.”

But even as the Biden administration pledges to amp up production of materials to administer vaccines — such as syringes — by using the Defense Production Act, it’s unclear how much faster vaccine doses can be made.

The two types of vaccines available now – made by Pfizer and Moderna –have never before been manufactured on such a massive scale. And while production is expected to increase this spring – Moderna has promised 100 million doses by the end of March with April considered the month the general public will be offered shots – the vaccine makers do not publicize weekly or monthly estimates.

“I don’t think by late February we’re going to have vaccine in every pharmacy in this country,” Rochelle Walensky, head of the Centers for Disease Control and Prevention, told NBC “Today” Show this week.

Meanwhile, almost 60% of older Americans say they don’t know how or when they can get the vaccine, according to a poll conducted by the Kaiser Family Foundation, and only 3 in 10 adults in the poll gave the federal government positive marks on the vaccine rollout.

Until more people can be vaccinated with the limited supply, state and local leaders are left urging residents to be patient.

“There’s a natural bottleneck for vaccine production, you know. We’re not going to see a doubling of vaccine availability anytime soon. So I do want to temper expectations that it’s going to take a little while, almost certainly, to really see much increase in our vaccine supply,” Mississippi State Health Officer Thomas Dobbs said.

The federal government anticipated that there would be challenges supplying enough vaccine for all Americans even with Operation Warp Speed’s efforts with vaccine companies to start producing doses even before any vaccines were authorized by the FDA.

Expecting a short supply initially, the CDC recommended that only specific groups of essential frontline workers or older Americans would be eligible during “phases” of distribution, helping to limit the demand to smaller populations at a time.

But in the final days of the Trump administration, the federal government called on states to expand eligibility so as to stop new cases and boost vaccination numbers

The directive sparked criticism of backlogs in states, but states said they were out of doses to give. Governors accused the Trump administration of creating the false expectations by promising to release a reserve of vaccine that had been released weeks ago.

Cuomo said the state will use all of the doses allocated to them in the first five weeks as of Friday and will now only have one week’s supply of vaccine at a time. The state and New York City have had to cancel some vaccine appointments as the supply fluctuated but Cuomo urged providers not to book people for appointments until they know the amount of vaccine they’ll receive.

The CDC’s vaccine tracker shows states have vastly improved their ability to get vaccines out and into the arms of people who qualify — boosting arguments by governors who say they’ve worked out the kinks in distribution and are just looking for more supply.

As of Friday, nearly every state in the country had reported administering vaccines to more than 4,000 people per 100,000, a per capita measurement that shows the speed of vaccine injections regardless of how big or small a state’s population is.

Aside from Nevada and Alabama, every state has reported administering at this level, per the tracker, while some states, including Connecticut, Oklahoma and Colorado, have begun vaccinating more.

The Biden administration, just two days in, now holds the responsibility for muddling through the confusion, which they so far haven’t been able to answer for.

“What we’ve really got to do is go into the trenches, and I’ve said this so many times, and figure out, what is it that’s the cause of what we’re hearing, that sometimes doses are not being given and they’re hanging around, and another state is saying, we need more doses,” Fauci, Biden’s chief medical adviser, said on CNN on Friday.

Asked how the public is supposed to understand the dysfunction in the system if Fauci doesn’t, he told CNN that he honestly doesn’t know.

“I have to tell you honestly, I don’t know right now. We have to go back and figure out what that is. And the important thing is to fix it,” Fauci said.

Governors are now working directly with the Biden administration to better understand their plans and push for changes to the process like notifying states further in advance how much vaccine they will receive each week.

“We would welcome the federal government coming in and setting up mass sites, but only if it means more vaccine is coming to Ohio,” Ohio Gov. Mike DeWine said in a letter to Biden reported by the Dayton Daily News.

And governors like Justice say they’ll be pushing the administration to do anything they can to protect more people in their state.

Texas deploys 1,100 National Guard to help administer COVID-19 vaccines to homebound seniors
Woman shot with rubber bullet at protest said she’s not surprised to see officer exonerated
J&J vaccine is up for review: Here’s what happens next
What is COVAX? How a global initiative is helping get COVID-19 vaccines to poorer countries
FCC to provide $50 subsidies on broadband internet for low-income households
Biden’s first 100 days live updates: Biden traveling to storm-battered Texas