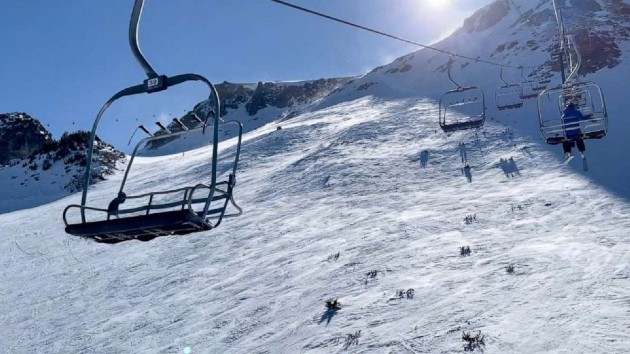 (NEW YORK) — Chair lift rides with strangers are out. Masks on the slalom are in.

The novel coronavirus pandemic is testing the nation’s 470 ski and snowboard areas and the local economies that depend on them, as millions of Americans hit the slopes in search of a quarantine escape.

“If you’re coming to one of our resorts, we are going to put safety first,” Robert Katz, CEO of Vail Resorts, the largest mountain resort ski company in the world, told ABC News.

Nearly a year after COVID-19 forced an abrupt and early end to the winter ski season, operators have adopted sweeping new rules and restrictions to keep athletes safe and remain open.

Skier reservations are required at many resorts, which have capped capacity to allow for more social distance. Indoor dining at slope-side chalets has been limited or prohibited, along with public space to warm up on a cold day.

If someone isn’t wearing a face covering, “we’ll be escorting him off the premise and not letting him in the next time,” Rusty Gregory, CEO of Alterra Mountain Company, told ABC News.

The $20 billion a year winter sports industry in the United States has a lot riding on the success of the safety measures. With fewer skiers and snowboarders expected to visit resorts this year overall, small mountain-town economies are desperate to ensure that public health conditions won’t scare off the limited business they currently have.

“We cannot afford to completely shut down businesses,” Bill Sauser, mayor of Mammoth Lakes, California, told ABC News at the beginning of the season.

An annual summit of the National Brotherhood of Skiers drew roughly 600 members to the resort for a week of skiing, eating, celebrating and enjoying one another’s company, according to Henri Rivers, the group’s president. But within two weeks, 150 members attending the Sun Valley event developed flu-like symptoms. Four members died due to the novel coronavirus.

Not long after, nearly all of the nation’s resorts shut down early due to the dangers associated with the new virus.

While resorts are now open and operating with safety restrictions, the National Brotherhood of Skiers — for the first time in its 47-year history — will not be gathering in-person this ski season.

“We felt it was in our best interest and in the interest of our membership safety, not to hold an in-person summit (this season),” Rivers told ABC News, adding that they plan on holding a virtual summit instead.

Many resorts will not be sponsoring large gatherings of any kind.

Safety on the slopes

The new restrictions, according to Katz and other ski industry leaders, are happening at most resorts across the country, regardless of size or ownership.

“It’s not a political statement,” Gregory said. “It’s a scientific and health-professional based requirement.”

Katz and Gregory said each mountain under their jurisdiction will be operating slightly differently based on its state and local ordinances. Some mountains may require operating at a limited daily capacity, others may just need to scale back their dining and lodging facilities.

According to public health expert, educator and researcher of Dartmouth’s Tuck School of Business, Lindsey Leininger, skiing isn’t a huge risk of transmission.

“Skiing is outdoors,” Leininger, who is also an avid skier, told ABC News. “Skiing, you’re pretty covered up, right? So you’re not having close indoor social contact. So, it’s all of the stuff around skiing that injects a lot of risks.”

Right now, because of the limited indoor dining options, skiers and boarders are enjoying their lunches in parking lots, using their trunks as both table and chair as if it was the 1970s again.

Leininger has also suggested avoiding indoor gatherings, hopping on flights and renting condos with people outside of your COVID-19 bubble.

If too many COVID-19 spikes are linked back to ski resorts, both Katz and Gregory are prepared to shut down again.

“If we think that the right decision is to close the resort, either temporarily or permanently — if that’s necessary to put the health and safety of our guests and employees and communities first — we absolutely will do that,” Katz said.

A mountain town struggles to find the balance

“To be clear, there will be people that come down with COVID everywhere, including ski resorts,” Gregory of Alterra told ABC News.

Katz agreed. But they have both said they’ve taken lessons from last spring and applied those as they prepared for this season.

Mountains will have beds and rooms for quarantining set aside, contact tracing will occur and mountains are in “constant communication” with their local community partners to coordinate and plan for when an outbreak does happen, Gregory said.

At the beginning of the pandemic, many mountain towns were hit hard financially. According to Gregory, some towns where Alterra operates reached almost 80% unemployment.

Mammoth Mountain, which is owned and operated by Alterra, is one of Southern California’s largest ski resorts.

“And businesses need to be open past a certain percentage to be viable,’ the Mammoth Lakes mayor said. “(But) we also need to make sure that our local front line workers are getting some type of protection.”

Sauser said for the mountain and town to both stay open, testing becomes imperative and mask-wearing is a must. The town of Mammoth has gone so far as to create a local ordinance to force mask wearing. A failure to comply with the mask-wearing policies is a “crime punishable by fine of up to $1,000, imprisonment for up to 90 days, or both,” according to a county order.

Public health expert Leininger reiterated that traveling to a small mountain village, like Mammoth, could lead to a deadly outbreak.

“A lot of these mountain towns do not have health care capacity to deal with a COVID surge,” Leininger said. “If you feel sick, you should not be traveling.”

With roughly 8,000 people, Mammoth only had 14 hospital beds and two ICU rooms at the beginning of the pandemic, according to Sauser. They’ve since doubled their capacity.

But the town’s positivity rate has been hovering around 20%, according to a local official, so the restrictions remain stiff.

The county Mammoth Lakes is in serves as a recreation base for Southern California. Nearly three to four million people visit each year, according to Sauser. To limit urbanites from traveling to the town and potentially infecting locals, Mammoth has banned short-term rentals.

This move has directly damaged the income of local businesses, according to Karen Crabb, an owner of multiple stores in town.

“There’s not a lot of people here,” Crabb told ABC News. “We’re virtually locked down. We can’t have any lodging here, it’s vacation homeowners only. So, our traffic is way, way down. And it’s challenging.”

Crabb estimated that about 10 local businesses have gone under in Mammoth since the pandemic began. At least three of those were on her block.

“The government isn’t letting you run your business anymore,” Crabb told ABC News. “They’re actually running our business for us.”

Gyms with maskless users shown to be at high risk for COVID spread: Study
Neighbor gives up COVID-19 vaccine appointment to stranger in need
South Dakota attorney general faces call to resign over fatal crash as impeachment proceedings begin
California commits $1.4 million to combat ‘horrific’ attacks on Asian Americans
“I didn’t have a problem with the way we were doing it” — ‘Simpsons’ creator Matt Groening responds to racial casting flap
What women need to know about fertility and COVID-19 vaccines