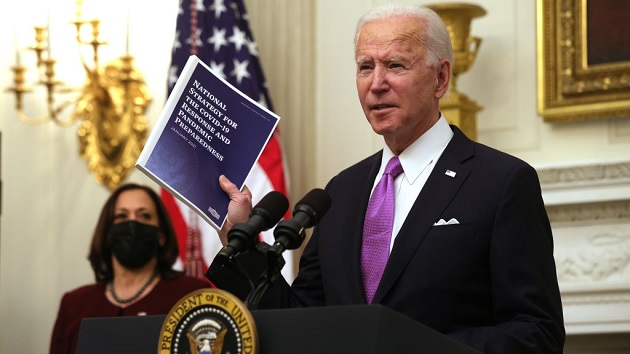 (WASHINGTON) — President Joe Biden is out with a new 200-page COVID-19 national strategy aimed at turning around the pandemic, including an ambitious new effort to boost supply and set up vaccine storefronts across America.

But vaccinating America in record time amid a fast-moving pandemic is easier said than done. Here’s what to know about Biden’s pledge of 100 million shots in 100 days.

There’s been 1 million shots per day in recent days, and it’s still not enough

If President Donald Trump overpromised on the vaccine, it appears Biden might be under-promising with his pledge to administer 100 million doses in 100 days.

In the final few days of the Trump administration, officials said they estimated some 1 million doses were being injected per day in recent days — the same pace Biden is promising now. So while Biden and his team are insisting this goal is ambitious, that pace is already mostly on track.

Worth noting too that public health experts say 1 million shots a day isn’t nearly fast enough to wrest the virus under control any time soon. That’s because two doses are needed for a person to be considered immunized, or protected.

Dr. Anthony Fauci, director of the National Institute of Allergy and Infectious Diseases and now Biden’s chief medical adviser, estimated 70 to 85% of the country’s 325 million population will need to become immune for the pandemic to die out. So to get there anytime soon, Biden would need to think bigger — more like 2 million shots per day.

Biden rejected the suggestion that his goal was too low, telling reporters on Thursday “come on, give me a break, man. It’s a good start.”

Among Biden’s ideas: vaccination storefronts run by the Federal Emergency Management Agency and mobile vans that can carry vaccine doses into rural areas or neighborhoods without a pharmacy.

But what many states and mayors say they need is simply more supply to tap into to fill the nation’s estimated 40,000 to 50,000 pharmacies that insist they have the capacity to administer vaccines.

CVS, for example, said in a statement this month that it is ready to administer 1 million shots a day if it had the supply.

“I saw some of this stuff Biden’s putting out, that he’s going to create these FEMA camps, I can tell you, that’s not necessary in Florida,” said Florida Gov. Ron DeSantis, an ally of former President Donald Trump, in a press conference this week.

“Once we have more, we can take these numbers to a whole new place,” he told reporters on Thursday. “We can vaccinate vast numbers of New Yorkers quickly, so long as there is the supply.”

Both Moderna and Pfizer use vaccines that rely on a relatively new method that prompts cells to make proteins that will trigger an immune response to the virus. It’s a new type of vaccine that has never before been manufactured on such a massive scale.

Currently, there are only about 10 million doses rolling off production lines between Pfizer and Moderna.

To boost supply, Biden has vowed to invoke the Defense Production Act, which would refocus U.S. factories in the interest of national security. But it’s not as simple as flipping a switch — for example, instructing a factory that currently makes antacids to suddenly start churning out raw ingredients or finished doses of this new type of vaccine.

And it’s still not clear what raw materials and supplies the vaccine makers need to scale up production beyond what the Trump administration has done.

Under Trump, the federal government has already given six vaccine developers, including Pfizer and Moderna, “priority ratings” under the DPA extensive assistance to put them first in line for supplies and helped the companies acquire any scarce supplies and equipment.

Biden’s team said they still want to know if more can be done, including opportunities to obtain a specific type of needle that makes it easier to extract a sixth dose out of each vial of Pfizer vaccine, increasing the supply by about 20%.

“We don’t have the visibility that we would hope to have into supply and allocations,” he told reporters.

The Trump administration denies it held back information and insists it used the DPA to the extent that it made sense, including invoking the law 18 times to apply “priority ratings” for all six vaccine developers, including Pfizer and Moderna.

An Health and Human Services spokesperson said Thursday that the government has helped with “expedited delivery” of such raw materials as sucrose and lipids, consumable supplies such as bio-reactor bags and equipment to expand production capacity for vials, needles and syringes.

He said the government also has “embedded” employees at key manufacturing facilities to identify bottlenecks in production.

The DPA comes with restrictions that some companies might not want. So it’ll be up to Biden to strike a balance between strong-arming industry and ensuring cooperation.

Invoking the law with a particular company means that business can’t export the supplies it makes overseas. The purpose is to “address the need at home,” said Nick Vyas, the executive director of the Center for Global Supply Chain Management at the University of Southern California.

And if the resource is considered essential, companies also can’t decline the request from the government under the DPA. They are compensated, however, and once their contract with the U.S. government is fulfilled, could use excess supply to tap into an overseas need, Vyas said.

Vyas, who urged the Trump administration to tap into the DPA, said he’s not worried about an industry backlash.

“My view is we will secure enough to capacity while not isolating the rest of the world,” he said.

The real test, Vyas said, will be executing down to the last mile of delivery, ensuring everything reaches its destination on time and for the right place.

“I’ve spoken to over 150 national health care systems over the last 11 months. They’re crying for help, resources, guidance,” he said. “So hopefully, we do this flawlessly, smartly, and hopefully, we don’t fail in our execution of this responsibility.”

While officials are estimating the number of shots in arms based on data provided by the states, the nation doesn’t have a clear picture of exactly how many people have gotten the vaccine and where.

One Centers for Disease Control and Prevention map shows 36 million doses distributed, but only 16.5 million doses administered, even though many states and large cities say they are out of doses to give.

Federal officials say the number of shots in arms is likely as much as three days behind because states have 72 hours to input the data. But some state officials also insist the numbers are off or wrongly suggest that they have doses sitting around when some doses are reserved for people’s second shots.

The information needs to flow better to the states too so they can plan, particularly if supply availability ramps up.

Claire Hannan, executive director of the Association of Immunization Managers, said his commitment to transparency will be a big step.