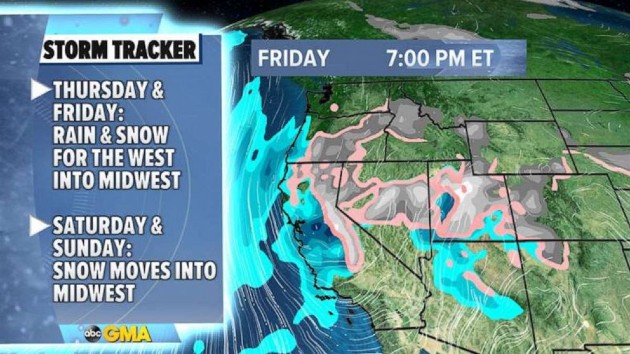 (NEW YORK) — A major weather pattern change is expected in the United States as stormy weather moves from west to east with heavy snow, severe thunderstorms and Arctic cold.

A new storm will move into the West Thursday and Friday and will bring much-needed rain to California, where dry winds helped spread another brush fire Wednesday.

On Wednesday, winds gusted up to 85 mph in Southern California, helping fuel the fire in Carlsbad, near San Diego. Some evacuations even had to be issued. Firefighters quickly responded, however, and were able to control the blaze.

Southern California will see rain and cooler temperatures on Friday as the storm system moves in. There is even a chance of snow in the mountains outside Los Angeles and San Diego. Part of the same storm will move into the Central U.S. over the weekend, bringing heavy snow from the Plains into the Great Lakes. Des Moines, Twin Cities, Green Bay and the west of Chicago will see the heaviest snow.

In the South, severe thunderstorms could erupt along the cold front from Texas to Oklahoma, including Dallas-Fort Worth.

More than half a foot of snow may fall from the Rockies into the Midwest over the weekend.

Ahead of the storm, a blast of Arctic air is expected to spill into the Midwest and the Northeast Friday and into the weekend.

The cold blast will make it all the way to the coast, including the I-95 corridor, with wind chills forecast to be in the teens from Washington, D.C., to Boston Saturday morning.