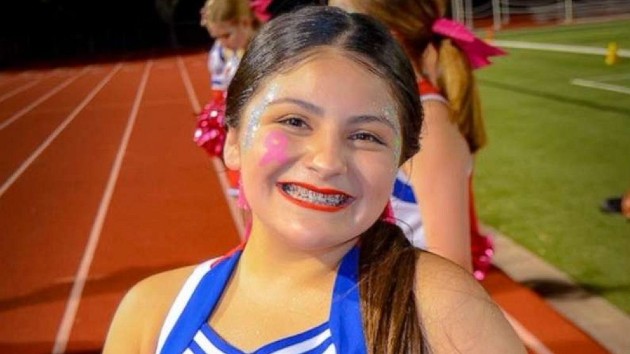 (NEW YORK) — A Texas mother is sharing the story of her teenager’s ongoing fight against COVID-19, in hopes to remind parents that young people are still at risk.

Meredith said Katelynn is an active cheerleader, volleyball player and runner with no pre-existing health conditions.

“Katelynn wants to tell people to wear their mask and let them know that kids get sick,” Meredith told Good Morning America. “Her main thing is it doesn’t discriminate. It doesn’t matter your age or gender.”

Katelynn is a high school sophomore. Her family suspects she was exposed to COVID-19 in December from a fellow student.

Meredith said Katelynn tested positive for COVID-19 on Dec. 22. She experienced an itchy throat, runny nose and a fever of 105 degrees.

“On Dec. 28, I woke up and had to go to work that day,” said Meredith, who is a certified nursing assistant. “I peeked in to check on her…she said, ‘I can’t breathe.’ We were on day 10 so I was hoping this fever would break.”

Meredith and her husband brought Katelynn to a local hospital, where an X-ray revealed she had pneumonia. Doctors told Meredith that she could bring her daughter home so long as her oxygen remains in the 90s level.

Meredith said that in 2012, she lost another daughter, Katelynn’s sister, to the genetic lung disease cystic fibrosis and wasn’t taking any chances.

“I was terrified. …I work in the nursing field and I knew what could happen next,” she said. “It was very hard for me but I had to hold it together for Katelynn. I think she looked for me for the strength, so I just held my composure. Deep down inside, I was thinking the worst.”

Katelynn was then brought to Dell Children’s Medical Center in Austin, Texas, where she was admitted for 13 days. There were talks of intubation, though Meredith said doctors never got that far.

She received medication for inflammation and high flow nasal cannula. Katelynn was also given the drug remdesivir, which is an antiviral med intended to treat COVID-19. She and her parents agreed to participate in a study so medical teams could learn more about administering the drug to pediatric patients hospitalized for COVID-19 without any underlying symptoms, Meredith said.

Katelynn was sent home on Jan. 8. Meredith said she is still experiencing headaches, tingling in her legs, bedwetting and fatigue. She is currently taking blood thinners and is beginning physical and occupational therapy.

Jay D. Bhatt, an ABC News medical contributor and Chicago-based primary care physician told GMA that little-known symptoms such as bed-wetting could be a complication of long-term COVID-19 exposure.

“We’re learning every day of new symptoms that emerge,” Bhatt said, adding that there’s a long list of post-COVID symptoms.

Meredith said she and Katelynn would like to raise awareness on how young people can still contract COVID-19.

“It finds infectious pathways through the nose and treats people the same, so if you’re in the path of the virus, you’re at risk of getting it,” Bhatt said.

“We’ve seen completely healthy people be exposed to the virus and have severe consequences including death,” he added. “We’ve seen people active and athletic who may have more of an ability to fight the virus if they’re infected, but it doesn’t keep them having severe symptoms.”

Meredith said she wants to thank her community and Katelynn’s cheer team for launching the GoFundMe page, which will help the family cover medical bills.

As Katelynn recovers, her teammates have made signs reading “Kat Strong” and hold them at sporting events in her honor.