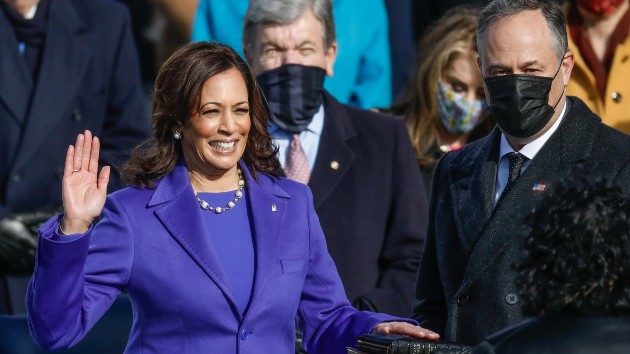 (NEW YORK) — For many members of the country’s South Asian population, Kamala Harris’ historic inauguration was a major turning point in their community’s place in America’s story.

Harris, the daughter of Indian and Jamaican immigrants, has never been shy speaking about her Asian heritage throughout her career. As she took the oath of office Wednesday, South Asian Americans young and old celebrated this occasion with eager anticipation for the possibilities for future generations.

Rani Gopal, 9, who ABC News first met on the campaign trail at a Harris event in South Carolina last year, said Wednesday she was excited to see Harris assume office.

Harris’ family story has resonated with many Indian Americans, many of whom are from immigrant families.

As of 2019, there were 2.7 million Indian immigrants in the U.S., second only to Mexico in foreign-born population, according to the Migration Policy Institute.

Harris’ mother, Shyamala Gopalan Harris, immigrated to the U.S. in 1958 for postgraduate studies at the age of 19 and married Donald Harris six years later. Gopalan Harris raised the vice president and her sister by herself following a divorce from Donald Harris in 1971, and instilled a hard-working ethic in her children.

“My mother always used to say, ‘Don’t sit around and complain about things, do something.’ I’ve tried to follow that advice every day and live by the example she set,” Kamala Harris said in an Instagram post.

Harris said she learned a lot about service from her grandfather P.V. Gopalan, a senior diplomat in the Indian government who she visited frequently until he died in 1998.

Harris’ inauguration comes as the Indian American community continues to grow and increase representation in leadership roles. The population has jumped from 1.9 million in 2000 to 4.2 million in 2019, according to U.S. Census data. During last year’s elections, 10 candidates of Indian descent ran for congressional seats, four of whom went on to be elected.

Ajay Bhutoria, a Biden delegate from California and member of the national finance committee for Biden’s campaign, told ABC News that Harris’ success will help encourage more South Asians to aim for those leadership positions.

“It’s a matter of great pride, great joy,” he said. “Someone of Indian descent, the whole community is uplifted. Now I can look up and say to my kids, ‘Hey, if you work hard, and play by the rules, you could be VP one day and maybe president in the future.”

“The generation before me and my generation has worked hard to be a part of the political process and I think we’ve achieved something through this journey,” he added.

Harris’ name, Kamala, means “lotus flower,” which is a powerful symbol in Indian culture. She’s talked about how a lotus grows underwater, but rises above the surface while its roots are planted firmly in the river bottom.

During her 2014 wedding ceremony, she placed a flower garland around Doug Emhoff’s neck, a Hindu tradition. In her memoir, The Truths We Hold: An American Journey, Harris said that one of her favorite Sunday dinners is Indian biryani.

Harris talked more about her love of Indian food with actress Mindy Kaling in a Twitter video in 2019.

Kaling, whose love letter to Indian American culture, the Netflix drama Never Have I Ever, won fans over last summer, was one of the many Indian Americans who expressed pride on social media during Wednesday’s inauguration. The actress shared a photo to Instagram of her daughter, 3-year-old Katherine, watching the television as the vice president was sworn in.

“I was at work, but apparently she said: ‘Is that mommy? It looks like mommy.’ Best compliment I ever got! It matters. Happy Inauguration everyone,” Kaling wrote in the post.