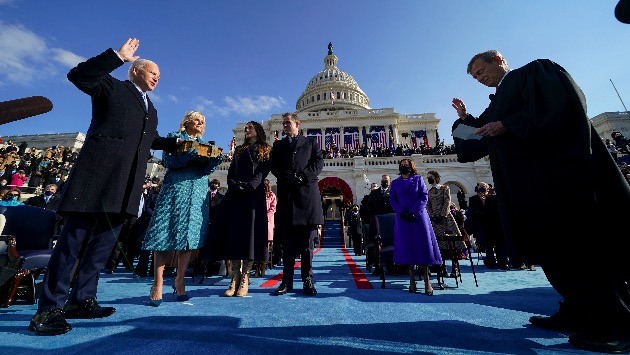 (WASHINGTON) — The ceremony that made Joe Biden as the 46th president of the United States was an inauguration like never before.

Wednesday marked the first time in more than 150 years that a sitting president didn’t attend the swearing in of his successor. Also absent were the morning traditions involving the outgoing and incoming presidents and their spouses meeting on the North Portico of the White House and sharing a limousine to the ceremony.

And for the first time in history, inauguration attendees, including lawmakers and former Presidents Bill Clinton, George W. Bush and Barack Obama, were forced to wear masks due to the ongoing COVID-19 pandemic, which has now taken the lives of more than 400,000 Americans. Two weeks after an angry mob of pro-Trump rioters stormed Capitol Hill, some attendees even wore body armor.

Trump leaves the White House for the last time

Donald Trump didn’t invite Biden to the White House prior to the inauguration ceremony.

Trump’s family applauded as he boarded Air Force One for the last time. He flew to Palm Beach International Airport, where his supporters lined the streets in a show of support as he made his way toward Mar-a-Lago.

The 45th president did leave a note for the 46th, despite speculation that he may forgo that tradition as well.

Harris, the first woman and person of color to ever hold the office of vice president, was sworn in by Justice Sonia Sotomayor, the first Latina member of the Supreme Court.

Chief Justice John Roberts later administered the presidential oath to Biden as Jill Biden held the bible and as his children, Hunter Biden and Ashley Biden, stood by.

Sen. Amy Klobuchar then introduced Biden for the first time as president.

In his inaugural address, Biden spoke about the “cause of democracy.”

“We’ve learned again that democracy is precious. Democracy is fragile,” he said. “And at this hour, my friend, democracy has prevailed.”

Biden discussed his hope for uniting a divided country.

“Every disagreement doesn’t have to be the cause for a total war,” he said, later stating that he would be a president of “all Americans” and would fight “just as hard” for people who did not support him.

Lady Gaga, equipped with a giant dove brooch and microphone, both in gold, performed a rendition of the national anthem.

Jennifer Lopez crooned a mash-up of “This Land is Your Land,” “America the Beautiful” and her own single, “Let’s Get Loud.”

Youngest person to read poem at inauguration steals the show

Amanda Gorman, a 22-year-old poet from Los Angeles, became the youngest person to read a poem at an inauguration after Biden was sworn in.

Gorman read the piece, “The Hill We Climb,” which she wrote after the siege on Capitol Hill on Jan. 6.

“We’ve seen a force that would shatter our nation rather than share it, would destroy our country if it meant delaying democracy,” she read. “And this effort very nearly succeeded. But while democracy can be periodically delayed, It can never be permanently defeated. In this truth, in this faith, we trust. For while we have our eyes on the future, history has its eyes on us.”

Biden was greeted with a 21-gun salute when he arrived at Arlington National Cemetery in Virginia.

Former Presidents Bill Clinton, George W. Bush and Barack Obama, along with former first ladies Hillary Clinton, Laura Bush and Michelle Obama, were present when Biden and Harris laid a wreath at the Tomb of the Unknown Solider.

Trump was notably missing from the row of former presidents. Former President Jimmy Carter, who is 96 years old, sent his well wishes but was unable to travel due to COVID-19 concerns.

President Joe Biden received his first presidential escort to the White House, but without throngs of supporters on the sidelines to cheer him on.

The route from 15th Street to the White House was heavily guarded by every branch of the U.S. military, joining about 25,000 National Guard troops spread throughout the capital.

Toward the end of the route, Biden was joined by his family after exiting “The Beast,” the presidential state car now adorned with the license plate “46,” and walked the rest of the way to 1600 Pennsylvania Ave. before entering the White House for the first time as president.

Democrats take control of the Senate

Among Harris’ first official acts as vice president was swearing in new members of the U.S. Senate.

The incoming senators included her successor from California and the two Democratic winners of Georgia’s runoff races. With the Senate now a 50-50 split, Harris can cast tiebreaking votes.

Biden administration’s ties to Uber, Lyft in spotlight after vaccine-assistance partnership announced
More fentanyl seized by CBP so far in 2021 than in all of 2020
Employers announce COVID-19 vaccine requirements as workplaces reopen
Broncos hire Kelly Kleine as Executive Director of Football Operations/Special Advisor to the General Manager
‘Made in America’ camping companies help the US prepare for summer adventures
2 detention deputies terminated after death of Black inmate Jamal Sutherland in Charleston jail