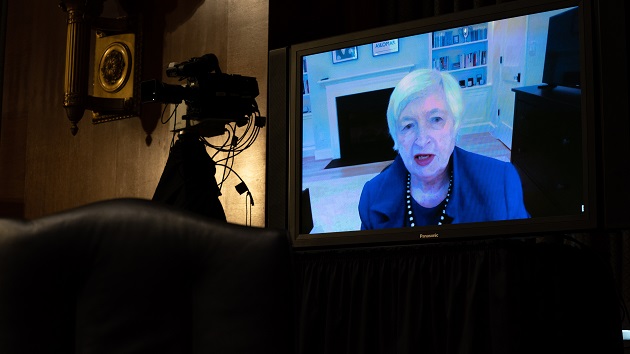 Yellen, 74, is the former chair of the Federal Reserve and, if confirmed by the Senate, would become the first woman to lead the Treasury.

“When economists look back on the pandemic, I expect they’ll conclude that Congress’ actions averted a lot of suffering,” Yellen, who appeared remotely, said at the hearing. “But more must be done. Economists don’t always agree, but I think there is a consensus now: Without further action, we risk a longer, more painful recession now — and long-term scarring of the economy later.”

Biden’s team rolled out plans for a $1.9 trillion economic rescue package last week that includes direct payments of up to $1,400 for eligible Americans.

Yellen discussed the pandemic’s widespread economic devastation on Tuesday, nothing that “whole industries have paused their work,” 18 million unemployment insurance claims are being paid each week and shelves at many food banks are empty.

“The damage has been sweeping, and as the president-elect said last Thursday, our response must be, too,” Yellen said.

While she noted that Biden’s proposed economic package will have an impact on the national debt, she said that with interest rates at historic lows, “The smartest thing we can do is act big.”

“In the long run,” she added, “I believe the benefits will far outweigh the costs, especially if we care about helping people who have been struggling for a very long time.”

In her opening remarks, Yellen also emphasized inequities within the U.S. economy that existed long before they were exacerbated by the pandemic.

“People worry about a K-shaped recovery, but well before COVID-19 infected a single American, we were living in a K-shaped economy, one where wealth built on wealth while working families fell further and further behind,” Yellen said. “This is especially true for people of color.”

Yellen pledged that after helping Americans endure the final months of the pandemic, her long-term focus will be on rebuilding the economy “so that it creates more prosperity for more people and ensures that American workers can compete in an increasingly competitive global economy.”

After her opening remarks, Yellen took wide-ranging questions on everything from relations with China to tax policy to the national debt.

Starting on day one, Yellen said, “It will be my core focus, if I’m confirmed as treasury secretary, to focus on the needs of America’s workers.”

When pressed about China, she called the nation “our most important strategic competitor.” Like Biden, she stressed working with allies to tackle issues that arise with China but also emphasized the need “to strengthen our own economy so that we can compete.”

Still, she said, the U.S. is “prepared to use the full array of tools” to address China’s “unfair and illegal practices.”

Yellen called climate change “one of the most critical issues facing our country.” She emphasized that one of Biden’s upcoming infrastructure plans will invest in clean technology, renewable energy and promote the use of electric vehicles.

She was also pressed about raising taxes or repealing the 2017 Tax Cuts and Jobs Act. Yellen said that in the middle of a pandemic it’s unlikely such actions would be immediate, but added that Biden likely would “repeal parts of the 2017 tax cuts that benefitted the highest-income Americans and large companies.”

“He’s been very clear that he does not support a complete repeal of the 2017 tax law — there are some areas though that he would amend,” she added.

Yellen was also asked about the ballooning national debt, saying this was something that needs to be addressed eventually, but pandemic relief and investments are more pressing to aid Americans and the economy.

“To avoid doing what we need to do now to address the pandemic and the economic damage that it’s causing would likely leave us in a worse place fiscally,” she said. “We really have to worry about scarring due to this pandemic of workers and the loss of small businesses that can really harm the long run potential productivity of our economy.”

The four-hour hearing touched on a range of issues, but the pandemic and its economic fallout remained at the forefront of most discussions.

Also Tuesday, Yellen earned bipartisan endorsements from every living former treasury secretary, all of whom signed a letter urging her “swift confirmation.”

“As former Treasury Secretaries, we are well aware of the demands of the job and the steepness of the learning curve for new officials,” the letter stated. “It is our view — based on personal experience for many of us — that Dr. Yellen’s experience, knowledge, judgment, and character make her uniquely qualified for this role.”