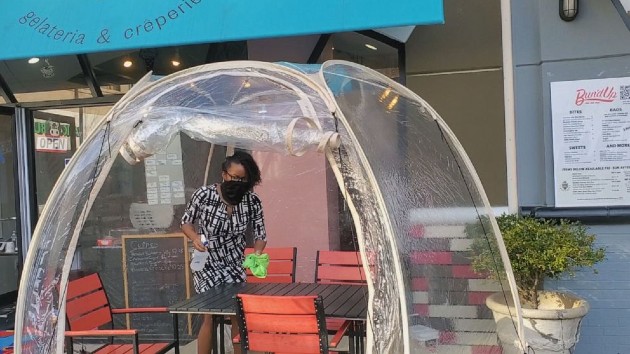 (NEW YORK) — With the government set to issue a new round of business loans as part of its latest COVID-19 relief bill, struggling small businesses, like Thereasa Black’s gelato shop, are hoping for more than a miracle.

Black opened the gelato store in Arlington, Virginia, in December 2019 — soon after returning home from a 13-month deployment in the Navy reserves. Her business is more than that, though; it also fulfills a promise that she made to her 4-year-old daughter Isabella.

“It means everything to me, honestly,” said Black. “This company is literally my promise to her that I’m never going to leave her again.”

When the coronavirus pandemic hit last year, the possibility of losing what she had worked so hard for became all the more apparent. Black said that during the entire month of April 2020, her business had made only a day’s worth, or 10%, of pre-pandemic sales.

“I saw everything crumbling, and then it was a question of like, ‘What now?’” she said.

Black said she applied for grants and applied for a loan through the Paycheck Protection Program in April, which aims to help small business owners like her stay afloat. After a painstaking application process, Black said she was approved for only $2,000. She said it wasn’t even enough to cover one month’s rent.

“I was furious,” said Black. In the end, Black said she was denied the PPP loan because she had applied for it through multiple lenders even though she had been advised to do so.

“It was crazy to me that I’m reading like, this company got $2 million … and it’s just like, is this a joke?”

Restaurant chains like like Shake Shack, Ruth’s and Chris Steak House came under fire last year after they received $10 million or more in PPP loans. They have since returned the money.

Billions of dollars from the first round of loans through the Paycheck Protection Program went to wealthy and well-connected businesses that were more likely to be white-owned, according to data released by the Small Business Administration (SBA), which manages the program, as reported by ABC News.

“It was really intended to be a lifeline for small businesses,” said Ashley Harrington, Federal Advocacy Director of the Center for Responsible Lending. “However, there were, from the outset, structural flaws with this program, structural barriers.”

The SBA also extended the PPP loans to nonprofit groups, which normally wouldn’t qualify through the agency. In all, the federal government gave more than $7 billion in loans to religious organizations.

Although some argue granting them loans under the program was appropriate as churches are employers and service providers, law professor Micah Schwartzman of the University of Virginia says it’s not that simple.

“What makes our PPP different [from] past funding programs is the direct financing of religious operations and religious institutions,” said Schwartzman. “It changes the landscape of how the federal government [and] state governments relate to religious organizations.”

“The public perception is that some organizations that have financial means should not have taken the money, even if they were eligible for it,” he added.

Megachurches, where pastors are sometimes worth millions of dollars, were also able to qualify for PPP. Data from the SBA showed churches led by Evangelical TV stars received anywhere from $250,000 to $5 million in loans.

Lakewood Church and Joyce Meyers Ministries told ABC News that the money from the loans was used to save hundreds of jobs and that the pastors did not receive any of the money themselves. First Baptist did not return a request for comment from ABC News.

Schwartzman pointed out that there was “no serious political or public opposition” to religious organizations being eligible for PPP loans like other nonprofits.

“I think most people understand that these are special circumstances during the pandemic, and so there wasn’t any major public outcry about this,” he said.

With the PPP program now reopened and more people with a critical eye on its lending, the SBA did not respond to specific questions from ABC News.

In a press release, the agency said that it is “calling upon its lending partners to redouble their efforts to assist eligible borrowers in underserved and disadvantaged communities.”

It has also set aside funds specifically for businesses with 10 employees or fewer, according to the press release.

Now, Black is one of many other business owners back in line to apply for loans and demand change from the PPP program in order to save their businesses.

“I mean, reality is that we can’t write the rules,” she said. “But we can try to demand something better.”