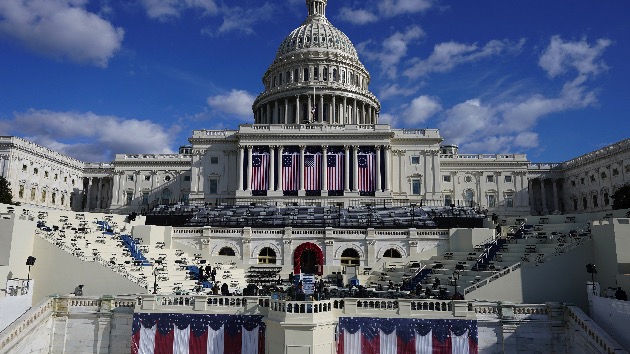 Secretary of State Brad Raffensperger has certified the results of the Jan. 5 runoff election, according to a press release.

The certificates of election must now be signed and issued by Gov. Brian Kemp. A representative for Kemp must then physically deliver those certificates for Rev. Raphael Warnock and Jon Ossoff’s victories to the secretary of the Senate, per Senate rules, triggering the swearing-in process.

On Wednesday after her own swearing in, then-Vice President Kamala Harris will swear-in Warnock and Ossoff, as well as the successor to her California Senate seat, former California Secretary of State Alex Padilla, according to a Harris aide.

Once the certificates are delivered and all are sworn in, Senate Minority Leader Chuck Schumer will be handed the reins as majority leader.

Senate Majority Leader Mitch McConnell is pointing blame at Trump for inciting the mob of rioters that attacked the U.S. Capitol on Jan. 6.

“The mob was fed lies. They were provoked by the president and other powerful people,” McConnell said from the Senate floor Tuesday.

His remarks come six days after the Democratic-led House impeached Trump on one charge of “incitement of insurrection” and after McConnell indicated he was weighing whether to vote to convict Trump.

After his final night at home before his inauguration as the 46th president of the United States, Biden is wishing Wilmington, Delaware, farewell in afternoon remarks at a “send-off event” before he heads to Washington, D.C., Tuesday afternoon.

Biden will no longer be taking an Amtrak trip from Wilmington to Washington, as he was accustomed to doing as Delaware senator, due to security concerns.

Once he’s in Washington, Biden and Vice President-elect Kamala Harris in the early evening plan to speak at the Lincoln Memorial Reflecting Pool to honor COVID-19 victims — on the same day the country may hit [400,000 deaths]( from the pandemic — while facing a National Mall filled with 200,000 American flags.

Vice President Mike Pence arrived at the White House for his last full day in office on Tuesday morning around 11 a.m.

Pence will be leading his final White House coronavirus task force meeting at 2 p.m., according to his public schedule.

Trump and Pence met at the White House last Monday for 90 minutes, their first time speaking after the deadly attack on the U.S. Capitol.

A defense official confirms that vetting has found two Army National Guard members who have ties to far right groups have been removed from the inauguration security mission. They are currently under investigation.

At least 21,500 National Guardsmen are in Washington, D.C., the D.C. Guard confirmed to ABC News on Monday, with the preparations coming ahead of Biden’s inauguration and in the aftermath of the deadly Capitol raid conducted by Trump supporters earlier this month.

The ramp-up in the number of Guardsmen in the nation’s capital means there could be four times as many American military service members in the city than there are in Iraq and Afghanistan combined.

The Department of Defense is referring questions to the Secret Service.

The rush of confirmation hearings for Biden’s Cabinet nominees kicked off Tuesday morning with those being vetted for top jobs in national intelligence and the heads of the Departments of Homeland Security, Treasury, State and Defense appearing before the Senate both virtually and on the heavily fortified Capitol grounds.

ABC News has obtained a copy of Homeland Security nominee Alejandro Mayorkas’ prepared opening statement ahead of his delivery, showing he’s expected to call the Jan. 6 Capitol Siege “horrifying” and pledge to prevent another. If confirmed, Mayorkas would be the first Latino and immigrant in the position.

“If I should have the honor of being confirmed, I will do everything I can to ensure that the tragic loss of life, the assault on law enforcement, the desecration of the building that stands as one of the three pillars of our democracy, and the terror felt by you, your colleagues, staff, and everyone present, will not happen again,” Mayorkas is expected to say.

As Biden is sworn in on Wednesday, he will have no cabinet nominees confirmed.

By contrast, when Trump was sworn in, a GOP-controlled Senate had three nominees ready on Inauguration Day, though Senate Majority Leader Mitch McConnell at the time blamed Democrats for the low number. On then-President Barack Obama’s first day in office, he had seven nominees confirmed by a Democrat-controlled Senate.

The 2021 committees are ramping up for Biden’s confirmation hearings at the same time as Trump’s impeachment trial is expected to start — with Pelosi expected to send the article by the end of the week — a challenge for the Senate, which is also reeling from the attack on the U.S. Capitol less than two weeks ago.

Jan 19, 10:51 am
Schumer could be Senate majority leader by Wednesday afternoon

Schumer is expected to meet with his outgoing GOP counterpart, Senate Leader Mitch McConnell, who hasn’t been in the minority since 2015, later Tuesday. The two are expected to discuss organizing a 50-50 Senate where Democrats hold the majority status by virtue of Vice President-elect Kamala Harris’ tie-breaking ability, Trump’s impending impeachment trial and the need to expedite Biden’s Cabinet nominations.

Sources tell ABC News Georgia Sen.-elects Raphael Warnock and Jon Ossoff could be ready to be sworn in as early as Wednesday.

Gabriel Sterling, the state’s now-famous voting systems manager, tweeted last week that his office will review the final certifications Tuesday, adding, “Hoping there are no issues.”

Georgia Secretary of State Brad Ratffensperger and Gov. Brian Kemp, both Republicans, will then sign their certificates and a representative of the governor must then physically deliver those results to the secretary of the Senate — required in Senate rules — to make the two election outcomes official and trigger the swearing-in process.

Meanwhile, in California, former Secretary of State and Sen.-elect Alex Padilla appears to be on track to be sworn in on Inauguration Day, filling the seat left vacant by Vice President-elect Kamala Harris. Padilla’s office is also tentatively tracking a Wednesday swearing-in, a spokesperson told ABC News.

Once Harris is sworn in as vice president, thereby president of the Senate, and those three senator-elects are sworn in, Schumer will be handed the reins as majority leader.

Biden, the second Catholic to be elected president, has invited the bipartisan congressional leadership to church with him on Wednesday morning ahead of his inauguration, and all parties have accepted, sources tells ABC News.

Senate Majority Leader Mitch McConnell and House Minority Leader Kevin McCarthy have separately accepted the invite and plan to attend — a move that is sure to project unity ahead of the official transfer of power.

President Trump is skipping Biden’s inauguration and traditional handover of power at the White House to hold his own sendoff at Joint Base Andrews while he still bears the title of president ahead of noon on Wednesday — making him the first president to skip his successor’s swearing since an impeached Andrew Johnson in 1869 snubbed Ulysses Grant.

Biden and Vice President-elect Kamala Harris have chosen to nominate Dr. Rachel Levine as assistant Secretary for health at the Department of Health and Human Services, the transition announced Tuesday.

Levine currently serves as secretary of health for Pennsylvania. She would be the first openly transgender federal official confirmed by the Senate, if approved.

“Dr. Rachel Levine will bring the steady leadership and essential expertise we need to get people through this pandemic — no matter their zip code, race, religion, sexual orientation, gender identity, or disability — and meet the public health needs of our country in this critical moment and beyond. She is a historic and deeply qualified choice to help lead our administration’s health efforts,” Biden said of Levine in a statement.