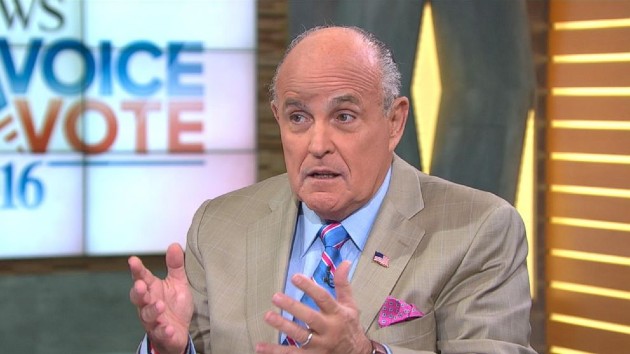 Giuliani, who has been leading the president’s efforts to overturn the results of the 2020 presidential election, told ABC News Chief White House Correspondent Jonathan Karl late Sunday that he will not be part of Trump’s legal team for the upcoming Senate impeachment trial due to his involvement in the Jan. 6 Washington, D.C., rally that led to the attack on the U.S. Capitol building.

“Because I gave an earlier speech [at the rally], I am a witness and therefore unable to participate in court or in the Senate chamber,” Giuliani said.

Giuliani initially told ABC News he was working on the president’s defense, saying Saturday that he was prepared to argue that the president’s claims of widespread voter fraud did not constitute incitement to violence because the widely-debunked claims are true.

Giuliani later met with Trump Saturday at the White House.

At the rally, the former New York City mayor urged the crowd to engage in “trial by combat” before rally-goers marched to the Capitol and breached the building as members of Congress were in the process of certifying president-elect Joe Biden’s Electoral College win. Five people, including a Capitol Police officer, died in the attack.

The House of Representatives voted last week to impeach Trump for inciting supporters to storm the Capitol.

A representative for Trump subsequently announced that no decision has been made on the president’s legal team.

“President Trump has not yet made a determination as to which lawyer or law firm will represent him for the disgraceful attack on our Constitution and democracy, known as the ‘impeachment hoax,"” Hogan Gidley tweeted early Sunday.

The IRS says 88% of families will receive a bigger child tax credit. How much will you get?
“In spirit I know that he will be with us”: Angela Bassett talks ‘Black Panther’ sequel without Chadwick Boseman
Biden says US will send 20 million more vaccine doses to other countries
Kidney donor and recipient meet for first time at baseball game
School bus driver says kindergartners’ curiosity helped stop armed hijacking
‘Spiral’ goes straight to the top; snuffs Angelina Jolie’s firefighter thriller at box office