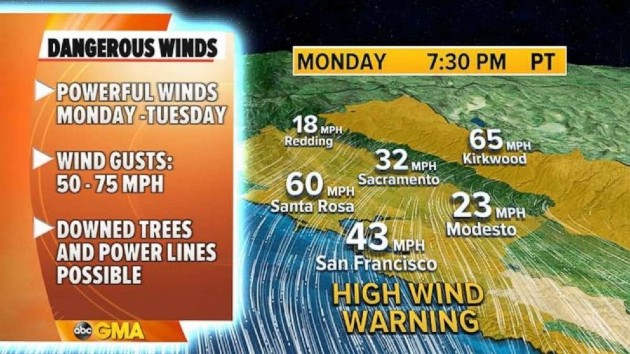 (NEW YORK) — Major damaging winds are expected in California this week from the San Francisco Bay area all the way down to Los Angeles.

The strongest winds in the San Francisco Bay area and Northern California will be on Monday and into the evening as winds could gust up to 50 to 70 mph with locally higher gusts.

Also, with all the dry wind, a fire weather watch has been issued south of San Francisco where these conditions could spread fires quickly.

For Southern California, winds will pick up Monday night into Tuesday and could gust as high as 70 to 80 mph with locally gusts near 90 mph.

A fire weather watch has also been issued for Southern California Monday night into Wednesday morning for rapid fire spread.

Meanwhile, a few areas around the country could see heavy snow in the next few days.

The first area is the eastern Great Lakes in western New York and western Pennsylvania where a winter storm watch and lake effect snow has been issued.

The heaviest snow will be north of Syracuse, New York, and between Buffalo, New York and Erie, Pennsylvania, where some areas could see up to 16 inches of snow.

There also could be some slick roads from Illinois to Ohio and northern Kentucky where 1 to 2 inches of snow is possible due to a quick moving storm system.

Another area in the country that will see heavy snow is in the Rockies from Colorado to New Mexico where locally more than a foot of snow is possible over the next 24 to 48 hours.

Stormy weather pattern on the way for the West and the South
What the latest Johnson & Johnson COVID vaccine data really means
A third stimulus check could be coming. Here’s what Americans did with the others
Disney California Adventure Park details ‘A Touch of Disney’ experience opening March 18
Teenage girl dies after saving younger brother when they fell in frozen lake
Clearfield Police: cars stuck because of snow, arguments, impaired people