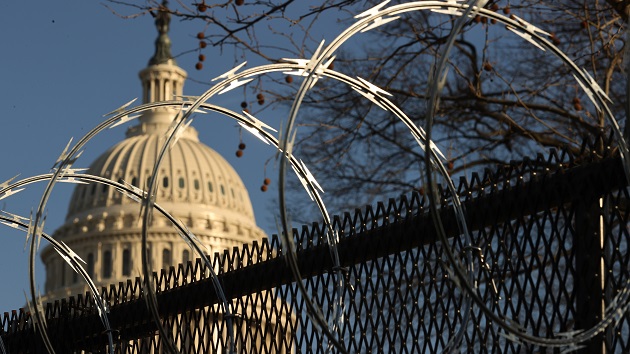 (WASHINGTON) — With just days until the inauguration next Wednesday, and in the wake of last Wednesday’s assault on the Capitol, security around the nation’s capital city has been ramped up to a level not seen in years, to what some are calling “fortress Washington.”

The 7-foot non-scalable fencing around the Capitol has been topped with razor wire, and behind it, hundreds of armed National Guardsmen.

On Thursday evening, Vice President Mike Pence made a surprise visit to the Guardsmen now protecting the building, thanking them for “stepping forward for your country.”

“It’s been my great honor to serve as your vice president, and I want to thank you for your service,” Pence said.

Preliminary plans called for the National Mall to be closed to the public on Inauguration Day for security reasons and streets were blocked off with concrete barriers throughout the city to protect against potential violence.

Businesses were boarded up as well.

A Department of Defense official confirmed to ABC News that as many as 20,000 National Guardsmen have been authorized to provide security for next week’s ceremony.

That number was upped after additional requests from the Secret Service, FBI and U.S. Capitol Police.

D.C. Mayor Muriel Bowser said in a news conference Wednesday that she has reiterated her request to the Department of the Interior to cancel or refuse public gathering permits from now through Jan. 14.

After the assault on the Capitol, Bowser requested the heightened security posture to begin six days earlier than originally scheduled amid threats of violent protests.

Child care at core of women’s slow post-pandemic return to work
Amanda Kloots prefers a “slow and sensitive rollout” into normal post-COVID life
More fentanyl seized by CBP so far in 2021 than in all of 2020
Broncos hire Kelly Kleine as Executive Director of Football Operations/Special Advisor to the General Manager
2 detention deputies terminated after death of Black inmate Jamal Sutherland in Charleston jail
Glenn Close, Jake Gyllenhaal, Leslie Uggams and more to unite for ‘Show of Titles’ musical benefit for Actors Fund