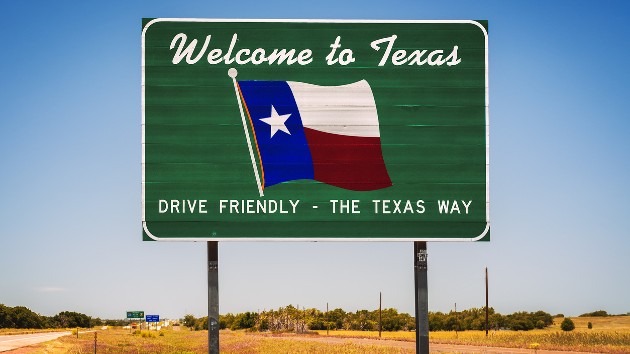 (NEW YORK) — The COVID-19 vaccine rollout in rural America was always something of a question mark.

Rural areas face challenges, especially with distributing the Pfizer vaccine, which needs to be kept at extremely low temperatures and doesn’t come in orders smaller than 975 doses.

But rural America is not a monolith. Even with those hurdles, West Virginia emerged as an early success story, garnering praise for its smooth rollout, which relied on partnering with independent pharmacies to distribute vaccines, instead of with CVS and Walgreens, and help from the National Guard. West Virginia has now vaccinated 6,177 out of every 100,000 residents, which is among the best per capita vaccination rates in the country, according to the Centers for Disease Control and Prevention.

Roughly 9.3 million Americans have received a first dose of the vaccine, according to CDC data.

At the other end of the spectrum is Texas, where last week, 40% of rural hospitals in the state still had no access to either COVID-19 vaccine (Pfizer or Moderna), the Texas Organization of Rural and Community Hospitals (TORCH) found.

“We’re two months into this and you have rural hospitals not receiving their shipment, which is pretty inexcusable,” said Alan Morgan, CEO of the National Rural Health Association.

That figure shrunk to 10% this week, with 16 of the state’s 157 rural hospitals still waiting for doses.

“That number is improving, but to me it’s still just tragic that we haven’t gotten doses to all the frontline doctors and nurses,” said John Henderson, president of TORCH.

“We’ve been working diligently with TORCH, the Texas Organization of Rural and Community Hospitals, and the facilities directly to help them complete that process so they can receive vaccine,” the Texas Department of State Health Services said in a statement. “Rural hospitals serve an important role in providing care in their communities, and we will allocate vaccine to them as they enroll.”

Overall, Texas has vaccinated 3,373 out of every 100,000 residents, according to the CDC, which positions it near the middle of the pack compared to other states’ per capita vaccination rates.

While they waited for the state, some hospitals improvised, getting doses from neighboring clinics or pharmacies, Henderson explained.

“This is a massive project. We aren’t going to do it perfectly. But we should have done better than we have,” Henderson said of the state’s rollout effort.

“I think when the dust settles there’s going to be enough blame to go around,” he added.

While the Moderna vaccine, which was rolled out after Pfizer’s, was always going to be a better fit for rural communities, Texas’ rural hospitals hit snags in dealing with the state. Some hospitals ordered freezer equipment to store the Pfizer vaccine, but didn’t complete the paperwork correctly to prove they had it or were missing signatures on their forms. Others were overlooked for the Pfizer vaccine because of their small staffs.

“No rural hospital has a thousand employees,” Henderson said, referring to the approximate number of Pfizer doses included in each order.

Tommy Johnson is the CEO of Crockett Medical Center, a critical access hospital in Texas with about 40 employees who work with COVID-19 patients every day. Johnson and his staff are still waiting for the vaccine.

“We have to protect that work force,” he said of his front-line workers. “It we don’t, there’s no one to take care of the people who are sick.”

While a few staff members managed to get vaccinated because they work at more than one hospital, most haven’t. And while Crockett’s application for Moderna doses is approved, Johnson said he’s still waiting to hear when those doses will actually be delivered.

“Hopefully we’ll be in the next release,” he said.

The Pfizer vaccine was never a realistic option for Crockett, Texas, a town of 6,500, where the 25-bed hospital only recently reopened after being closed for more than a year.

Then there’s the question of whether staff want the vaccine in the first place. While a Kaiser Family Foundation poll conducted in December found that 35% of rural residents were hesitant to get the COVID-19 vaccine, Henderson thinks hesitancy among rural health care workers has diminished as more people see their coworkers getting vaccinated.

In Crockett, Johnson’s staff is divided.

“I’d say we’re a 50-50 split. Half are champing at the bit to get one and half are really reserved about getting one,” Johnson said.

“As soon as it’s available for me I’ll take it,” he added.

As hospitals waited on the state for doses, Gov. Greg Abbott was blaming hospitals for the sluggish rollout.

“A significant portion of vaccines distributed across Texas might be sitting on hospital shelves as opposed to being given to vulnerable Texans,” Abbott wrote on Twitter in late December. “The state urges vaccine providers to quickly provide all shots.”

“They were very frustrated when the governor tweeted that vaccine sitting on hospitals shelves,” he added. “They’re emphatic that they’re getting every vaccine into people’s arms within three or four days of receipt.”

While it’s still early in the distribution process, the successes and failures in getting the vaccine to rural health workers could predict how the general population rollout goes, Morgan explained.

“What we can say so far is that we’ve seen some really good examples of this working out in rural communities and some poor examples,” Morgan said.

From Henderson’s perspective, the coming weeks represent an additional challenge for Texas.

“I worry that if we as a state don’t catch up or rebalance, there will be rural communities that will be left behind,” he said. “And therefore will have more sickness and death.”