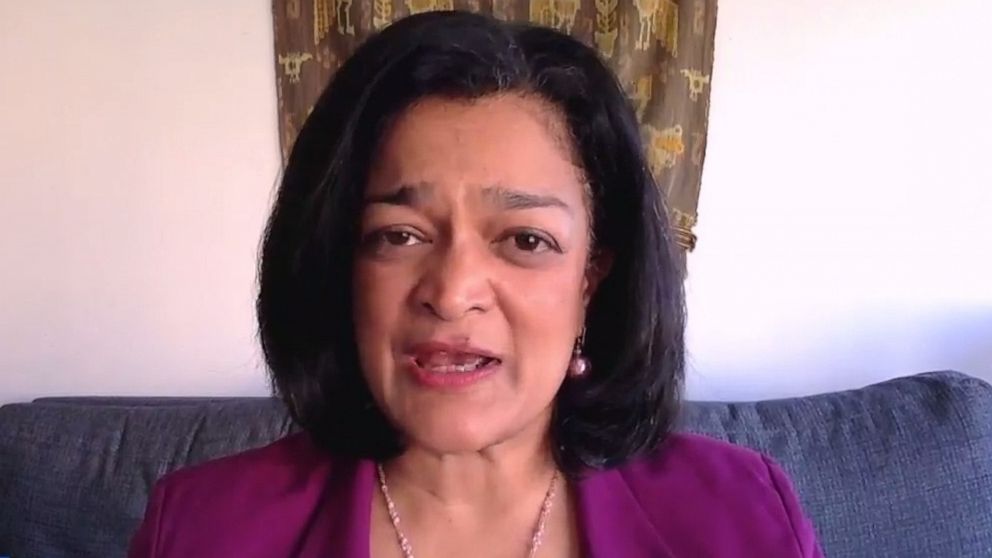 (WASHINGTON) — Rep. Pramila Jayapal addressed criticism Wednesday over a moment caught on video in which she’s seen without a mask in the U.S. Capitol’s House chamber as a violent mob of pro-Trump supporters attacked the building.

The Washington Democrat, one of three House members to test positive for COVID-19 in the wake of the Capitol Hill riot, explained to “The View” what was happening during the moment captured on video where she was seen without a mask during the attack.

“We were trapped in the gallery. There were about a dozen members of Congress in the section where I was because of a terrorist attack by insurrectionists who were fueled, incited and aided by the president of the United States,” Jayapal said. “Because of this violent, destructive attack on the Capitol, the most destructive since the war of 1812, with intent to take hostages, to hang Mike Pence, to kill Nancy Pelosi and other Democrats, we were then under siege.”

She went on to say that once Capitol police realized what was happening, they told members of Congress to get out of their chairs, drop down to the floor and remove their masks so that they would be ready to put on their gas masks.

“If you look at those pictures, I am holding, in my right hand, a gas mask,” Jayapal said. “Most of us were waiting to be instructed by the Capitol police as to when to put on the gas mask, but we were specifically told to take off our masks because you can’t breathe within the gas mask if you have the other mask on.”

Jayapal detailed what transpired before and after she was seen without a mask.

“All of us have been wearing masks. We took off our masks and we held our gas masks, and we were down on the floor actually as other members of Congress on the main part of the floor had already been ushered out,” she said.

“We were literally under siege, under attack, not knowing if we were going to live or die,” she said. “That’s the situation we were in. We were waiting for the instruction to put on the gas mask, and had been instructed to take off those masks.”

Along with Jayapal, Reps. Brad Schneider, D-Colo., and Bonnie Coleman, D-N.J., also tested positive for COVID-19 after the attack. All three have blamed Republican colleagues, who refused to wear masks as the hundreds of lawmakers in the Capitol building crowded together in a secure location following the evacuation of the House gallery.

Democrats are said to be moving forward with plans for a mandatory mask requirement on the House floor that will include a fine for those who breach it. The fine would be $500 for the first offense and $2,500 for the second. Jayapal told “The View” that if the bill is passed, enforcement will be key.

“I called for that immediately, and have been calling for enforcement of the rules because we’ve had the rules around mask-wearing on the floor and in capital buildings, but they are not paying attention to it,” Jayapal said. “The only way to deal with it, then, is to enforce.”

Jayapal said she “also called for members to not be allowed to be on the floor” if they don’t comply with mask regulations, which she said would affect their ability to vote.

On testing positive for COVID-19, Jayapal says there’s “no question” she contracted the virus during the lockdown at the Capitol.

“I actually started quarantining immediately after that day because I did feel that it was a super-spreader event,” she said. “Then, on Sunday, I started feeling the symptoms … flu-like symptoms, a fever, chills that wouldn’t go away, sore throat, [a] general miserable feeling, and those have continued.”

Jayapal said she was tested for the virus five days after the Capitol riot, and that the test came back positive that same evening.

“I got it from that room because I had tested negative literally the day before, and so there’s no question to me,” she said.

“When these Republican Congress members refuse to put on masks,” she added, “it’s not just people like me that get affected, it’s the entire country that looks at that example and thinks that somehow they don’t need to wear masks, which is one of our best ways of protecting at this point and stopping people from getting ill and dying.”