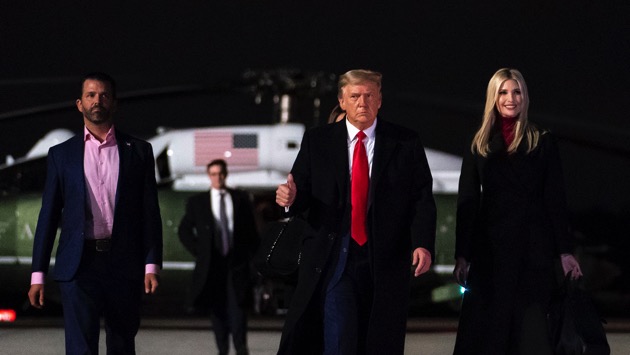 (WASHINGTON) — Under the Former Presidents Act, President Donald Trump is entitled to an office and staff, a pension and up to $1 million for annual security and travel expenses and lifetime protection from the Secret Service, all funded by taxpayers once he leaves office.

That is, unless he’s impeached and convicted by Congress.

That’s one of the exceptions to the 1958 law, which was amended in 2013 to provide presidents with Secret Service protection for life.

Denying Trump post-presidency benefits is one of the several justifications offered up by Democrats for their push to impeach Trump after the storming of Capitol Hill on Wednesday.

On Monday, Democrats introduced an impeachment resolution charging the president with “inciting an insurrection” by encouraging words to supporters before they converged on the Capitol.

They also hope to bar him from holding federal office in the future, which would require a simple majority vote of the Senate if two-thirds of the chamber votes to convict.

Trump would be entitled to these benefits absent congressional action. And he could also receive them if he were to resign from office before Jan. 20. President Richard Nixon retained his presidential pension, and other benefits after his resignation in 1974.

Sources have told ABC News that in the days after the 2020 election the president has been asking about his post-presidency financial security, fearful for his and his family’s safety.

Before receiving Secret Service protection during his race for the White House four years ago, Trump traveled the country with a small private security team.

Jordana Brewster offers advice to those who may find Mother’s Day difficult to celebrate
Happy #Halfway2Halloween! The Muppets’ 1st Halloween special coming to Disney+
Mads Mikkelsen says ‘Indiana Jones 5’ script “was everything I wished it to be”
Warren Buffett’s Berkshire Hathaway stock price is too high for Nasdaq to handle
“Mrs. C” from ‘Happy Days’ tops TV moms match-up
Baker donates cakes to families that lost children for Mother’s Day