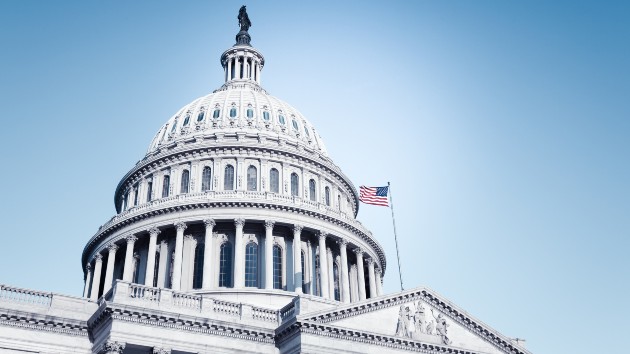 (WASHINGTON) — In search of historical guidance and legal tools to respond to the violent siege of the U.S. Capitol last week, members of Congress and legal scholars alike are re-examining a little known section of a Reconstruction-era constitutional amendment.

Section 3 of the 14th Amendment, in theory, gives Congress the authority to bar public officials, who specifically took an oath of allegiance to the U.S. Constitution, from holding office if they “engaged in insurrection or rebellion” against the Constitution and therefore broke their oath. But the provision has rarely been used or tested, and so scholars are unsure about how exactly Congress could exercise authority under this provision and to what end today.

House Speaker Nancy Pelosi, D-Calif., formally asked her colleagues on Sunday for their views on this part of the Constitution.

Rep. Alexandria Ocasio-Cortez told ABC News Chief Anchor George Stephanopoulos that Congress was exploring many possible legal and political avenues to respond to the attack and hold the president, if not other elected officials, accountable.

“This is not either the 25th Amendment or impeachment or, you know, investigating our other avenues through the 14th Amendment,” she said on ABC’s This Week Sunday. “I do not believe that this is a question of deciding or debating between which of these avenues we should pursue. I believe we should take an all-of-the-above approach.”

Then Monday, Democrats’ explicitly referenced it too in their newly drafted article of impeachment against President Donald Trump.

Following the end of the Civil War, Congress faced questions about who should be able to retain power and hold public office as the country stitched itself back together.

“They fight a war over slavery and lose it — 700,000 to 800,000 people dead,” Civil War historian and Columbia University professor Stephanie McCurry said of the Southern states. “They lose in April of 1865, but by December of 1865 they are sending back to Congress — people like Alexander Stephens, the former vice president of the Confederacy. It’s unbelievable they thought they could do that. They are completely unrepentant and they are used to exercising power.”

Dismayed at the time, members of Congress refused to seat men like Stephens and the debate spurred the drafting of Section 3 of the 14th Amendment, which was ratified three years later in 1868.

“It doesn’t say anything about Confederates, it’s about anybody who commits this kind of thing. My view is it would apply to President Trump and bar him for holding any office either right now or in the future,” Pulitzer Prize-winning Civil War historian Eric Foner told ABC News on Monday.

Foner emphasized the part of Section 3 that refers to those political and military leaders who previously took an oath of office. He argued the provision was not intended to bar average Confederate soldiers from public office, but specially those who had previously sworn to protect the U.S. Constitution.

“It was a punishment for having rebelled but, in a sense, a rebellion after having taken an oath. It was perjury they were punishing them for,” he said. “(Trump) took an oath to support the Constitution and now he has given aid to insurrection and that is the kind of thing the people who wrote the 14th Amendment were trying to avoid. Even though it has only been used a handful of times in American history, it’s there.”

According to Foner, for a few years the law was enforced in the South and there were examples of people who had to leave their public offices at the direction of the U.S. Congress and local officials, because they had previously been Confederates. But in 1872, Congress passed a larger amnesty law, and Section 3 of the 14th Amendment was essentially shelved.

Trump urged his supporters to “show strength” Wednesday morning before many in the mob marched to Capitol Hill and breached the halls of Congress. Most of the conversations around the 14th Amendment since last week have been about whether Congress could use its authority, under this provision, to remove President Trump specifically or forbid him from seeking office again.

Some have wondered whether the same part of the Constitution could be applied in this case to also punish sitting members of Congress for their potential role in inciting violence by way of perpetuating misinformation around the election.

Freshman Rep. Cori Bush made her legislative debut introducing a resolution over the weekend that aims to expel some of her colleagues who voted against certifying the 2020 election results. Her legislation, co-sponsored by 47 Democratic House members, names Rep. Mo Brooks, Sen. Josh Hawley and Sen. Ted Cruz, specifically, and accuses them having “taken unprecedented steps to defy the will of the American people.”

“Section 3 of the 14th Amendment to the Constitution posits that no individual can serve in the House of Representatives who has engaged in disloyalty or sedition against the United States. There is no place in the People’s House for these heinous actions. I firmly believe that these members are in breach of their sworn Oath of Office to support and defend the Constitution of the United States. They must be held accountable,” Bush said in a statement.

The House of Representatives and the Senate each respectively have their own rules for reprimanding and expelling members, and it is unclear whether Congress could circumvent those rules by passing a law pursuant to parts of the 14th Amendment instead.

Michael Klarman, constitutional law scholar at Harvard Law School, though told ABC News in email that he believes that applying Section 3 of the 14th Amendment to disqualify from office a member who questioned the legitimacy of the election, based on the events from last week was “a real stretch.”

He added that “insurrection” and “rebellion” are “legal terms with established meaning. … I just don’t think Wednesday’s event would qualify.”

“While (Sens.) Hawley and Cruz are despicable, and I have signed the petition calling for their disbarment, it seems a huge stretch to me to describe what they did (Wednesday) as ‘insurrection or rebellion,"” Klarman wrote.

“The idea is this provision itself ought to, ipso facto, disqualify the president from continuing to hold office,” Vladeck said. “I don’t think anyone ever thought this would be used to actually oust a sitting president who has been serving for the better part of his entire term.”

Following the Civil War, Americans had a clearer example of what counted as insurrection than many do today. Most likely, for Congress to remove someone from office on these grounds or bar them from future office, members would need to first investigate the violent events of last week and make a formal determination or declaration as to whether the mob’s actions were premeditated, organized or if they constituted a coordinated attack against the federal government.

“I think it would require Congress to pass a law … saying that what happened on Jan. 6th, before it and around it, was insurrection under the constitution and thus (Trump) is disqualified. They would have to make some findings about why this qualifies as insurrection. What does insurrection mean in 2021?” ABC News legal analyst and Cardozo Law professor Kate Shaw said on Monday.

“Even if as a scholar you say, ‘this doesn’t match my conception of an insurrection,’ that in no ways means Congress is precluded from reaching a different conclusion … they are entitled to make their own determination,” Shaw continued, saying the courts would then likely weigh in.

Shaw added too that Rep. Jaime Raskin, one of the authors of the new article of impeachment, is also a former constitutional law professor.

The IRS says 88% of families will receive a bigger child tax credit. How much will you get?
“In spirit I know that he will be with us”: Angela Bassett talks ‘Black Panther’ sequel without Chadwick Boseman
Climate change may be causing an early start to fire season in the West, experts say
Hall of Fame Broadcaster Marv Albert retiring
Gas hits highest price in six years, fuel outages persist despite Colonial Pipeline restart
Photo of mom working in bathtub leads to reflection on child care crisis