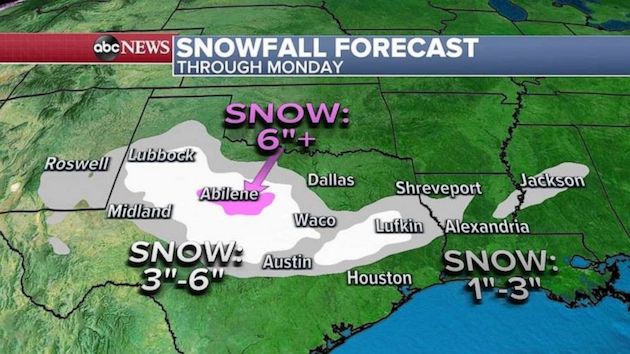 (NEW YORK) — A new winter storm is beginning to develop in the southern high plains this morning and it will bring some snow across Texas, Louisiana and Mississippi over the next 36 hours.

The very beginnings of this storm brought some snow across parts of New Mexico and Colorado on Saturday.

While snow amounts were relatively light — locally 1 to 2 inches — it was enough to make roads slippery and cause spinouts and accidents in parts of Colorado Springs.

The storm is currently bringing some snow across the Texas and Oklahoma panhandle and as the storm moves east across Texas today, a couple of heavy bands of snow will develop across parts of Central Texas.

Dangerous travel conditions are expected in parts of the state, especially near Abilene, where snowfall rates could exceed 1 inch per hour.

As the storm moves across the eastern half of Texas, the system will meet some mild air and there will be rain and snow mixed across the region which should hold down accumulations in Dallas and Waco.

However, there should be enough snow to cause slippery roads with locally 1 to 3 inches of snow and the best chance for accumulation well outside the city itself.

Some of the heavy snow might have a chance to accumulate in eastern Texas after sunset with locally over 3 inches of snow possible in locations such as Lufkin.

On Monday morning, snow will be possible across parts of Louisiana and Mississippi and the National Weather Service is reporting the last time more than 2 inches of snow was reported in Shreveport was in 2015, and the last time there was a good measureable snow in the city overall was in 2018.

It is important to note that this storm will fall apart as it reaches the Southeast with little impact expected by Tuesday and Wednesday.

Overall, the weather pattern is fairly quiet across much of the U.S. while the Northeast will have a cold January morning with wind chills in the teens and 20s as winds in the region begin to subside.

On the West Coast, several storms lined up across the Pacific will move towards the Northwest over the next few days which should add to rainfall totals and snow totals in the region.

One of those storms today will help waves to exceed 30 feet in some parts of the West Coast of the U.S. as high surf advisories have been issued for nearly the entire western U.S. coast line as a result.

For those that enjoy winter surfing, some spots — especially in California — could see excellent surfing conditions.

In Southern California there could be some brief critical fire conditions due to dry gusty offshore winds that could exceed 50 mph at times.