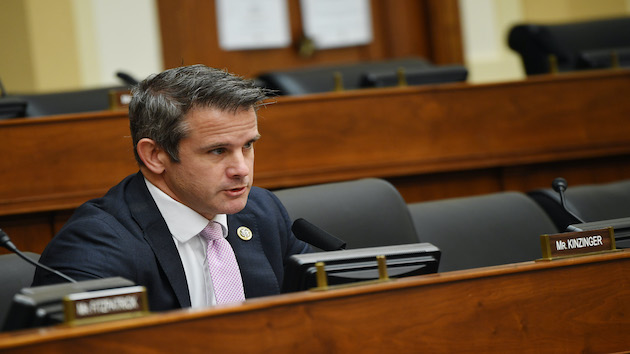 (WASHINGTON) — Illinois Republican Rep. Adam Kinzinger called for President Donald Trump to resign on ABC’s “This Week” Sunday, while in a separate interview Rep. Alexandria Ocasio-Cortez said that impeachment should “absolutely” be scheduled and that it should go as far to bar Trump from being able to run for office again.

“I think the best thing would for the country to heal would be for him to resign, the next best thing is the 25th Amendment,” Kinzinger told ABC News Chief Anchor George Stephanopoulos.

“That’s why I call on Vice President Pence to do it,” he added. “This is the thing that just gets us out of the debate in Congress, it doesn’t victimize Donald Trump, it makes him look as bad as he has been here.”

“I think it victimizes Donald Trump again and I think there’s a moment that we’re in right now where Donald Trump, he’s looking really, really bad,” Kinzinger said. “I’ll vote the right way you know if I’m presented with that I just think it’s probably not the smartest move right now but I think that’s going to be out of my hands.”

Kinzinger did add that he felt impeachment would be the right move if “we had more than basically 10 days left of the administration.”

“Yeah he’ll be impeached a second time but also exonerated in theory a second time, depends on how that trial goes, if they can do it when he’s out of office, Kinzinger said. “I think there’s a lot of ideas with censure — with preventing him from being able to run again. You know the reality is we just don’t have a lot of time in this administration left which right now is a good thing.”

“Our main priority is to ensure the removal of Donald Trump as president of the United States,” Ocasio-Cortez told Stephanopoulos on Sunday. “Every minute and every hour that he is in office represents a clear and present danger, not just to the United States Congress but frankly to the country.”

“We’re also talking about complete barring of the president — or rather of Donald Trump — from running for office ever again,” she added. “And in addition to that the potential ability to prevent pardoning himself from those charges that he was impeached for.”

Stephanopoulos pressed Ocasio-Cortez, bringing up a letter from House Republicans saying it would further divide the country.

“What happened on Wednesday, was insurrection against the United States. That is what Donald J. Trump engaged in and that is what those who stormed the Capitol engaged in,” she said. “And so when we talk about healing, the process of healing is separate and, in fact, requires accountability. And so if we allow insurrection against the United States with impunity, with no accountability, we are inviting it to happen again.”

She then criticized her colleagues for downplaying the severity of what happened at the Capitol.

“Perhaps my colleagues were not fully present for the events on Wednesday, but half of — we came close to half of the House nearly dying on Wednesday,” she said.

Kinzinger said that he agreed that the lives of members of Congress were at risk Wednesday.

House Speaker Nancy Pelosi has asked members to be prepared to return to Washington this week in a letter, a signal that the House could take up and pass the impeachment article to the Senate after it is formally introduced on Monday. A draft article of impeachment circulating among House Democrats Friday would charge Trump with “incitement of insurrection.”

Stephanopoulos on Sunday pressed Ocasio-Cortez on the timing of impeachment, bringing up concerns that it could hold up legislation and confirmations at the beginning of President-elect Joe Biden’s administration. She said that addressing what happened takes precedence over the Senate acting on Biden’s nominees.

“I think we need to review what actually happened on Wednesday,” Ocasio-Cortez said. “The National Guard was requested by the D.C. Council, and was rejected. We are talking about and we are hearing about a complete and utter lack of preparation. The chief of the D.C. Capitol Police lied to House administration Chairwoman Zoe Lofgren about the preparations of what happened.”

“If we do not take corrective action right now, we are talking about those same potentially compromised element elements, being in charge of the president’s security, during the inauguration,” she added. “With profound respect, I believe that the president’s safety and the safety of the United States Congress and in the security of our country.”

“It takes precedent over the timing of nominations and the timing of potential confirmations,” she said. “This is an immediate danger right now.”

Ocasio-Cortez also said she did not think impeachment is the only remedy.

“We are looking towards multiple avenues. And I don’t — I do not believe that those avenues are mutually exclusive,” she said referencing the 25th and 14th Amendments.

On Sunday, Stephanopoulos pressed Kinzinger on why so few Republicans had spoken out against the president.

“I think a lot of it is fear,” he said. “You know there’s fear that infects so many sides of the debate right now.”

“If inciting to insurrection isn’t, then I don’t really know what is,” the ABC News contributor said.

More fentanyl seized by CBP so far in 2021 than in all of 2020
“In spirit I know that he will be with us”: Angela Bassett talks ‘Black Panther’ sequel without Chadwick Boseman
Climate change may be causing an early start to fire season in the West, experts say
Rep. Liz Cheney criticizes ‘disgraceful’ GOP attempts to ‘whitewash’ Capitol attack
Former NBA champion Ben Wallace to be inducted in 2021 Basketball Hall of Fame
Raging pull: De Niro’s rep says he’s being treated for a quadriceps injury