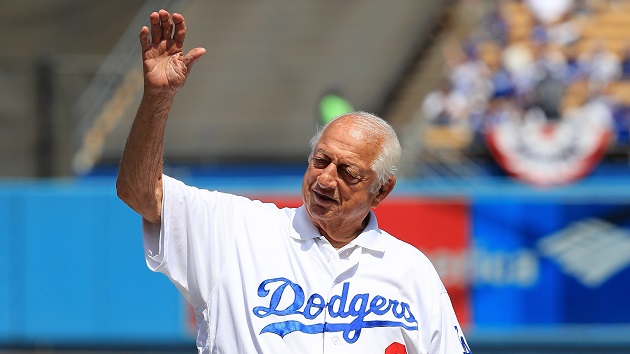 (LOS ANGELES) — Tommy Lasorda, the Hall of Fame manager who led the Dodgers to 2 World Series titles, has died at the age of 93.

In a statement, the Dodgers said Lasorda went into cardiac arrest at 10:09 p.m. Thursday night. He was taken to the hospital with resuscitation in progress, before being being pronounced dead shortly before 11:00 p.m.

In all, Lasorda spent 71 years with the Dodgers organization, managing the team for 20 seasons and racking up 1,599 wins. Most recently, he served as a special advisor to the team for the last 14 seasons.

Lasorda could often be seen on the field during games, wearing his number 2 jersey. The Dodgers retired the number in 1997, the same year he was elected to the Hall of Fame.

The Dodgers also said that Lasorda often expressed his desire to see the Dodgers win another championship — and he was able to so. He traveled with the team to Arlington, Texas, where he got to see them defeat the Tampa Bay Rays to claim their first World Series title since his tenure as manager.

Lasorda is survived by his wife Jo, their daughter Laura, and granddaughter Emily Tess.