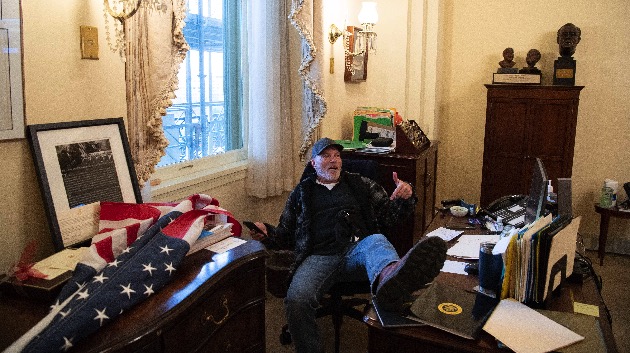 (WASHINGTON) — Richard Barnett, the man who allegedly broke into House Speaker Nancy Pelosi’s office, posed for pictures and stole mail from her desk, was arrested Friday morning in Little Rock, Arkansas, and has been charged with three federal counts.

Barnett allegedly entered the restricted office area and took photographs with his feet propped up on furniture, according to a criminal complaint filed in U.S. District Court in Washington, D.C.

Barnett, who goes by the name “Bigo,” was captured in news media photographs and took an envelope off of Pelosi’s desk addressed to Rep. Billy Long, R-Mo., the complaint says.

Saul Loeb, a staff photographer at Agence France Presse, was the one who snapped the now infamous photograph of Barnett behind the desk in Pelosi’s office.

“[Barnett] was sitting at her, at a staff member’s desk, in her office with his feet up, just making himself at home, you know, just sort of like he owned the place,” Loeb told ABC News. “Here you have Nancy Pelosi, one of the highest members of the U.S. government, and this theoretically highly secure location in this highly secure building and these people are just basically doing whatever they want and looking whatever they want.”

Barnett was charged with entering a restricted building, violent entry and disorderly conduct on Capitol grounds, and stealing public property.

“The shocking images of Mr. Barnett with his boots up on a desk in the Speaker of the House’s office on Wednesday was repulsive,” said Jeffrey A. Rosen, acting attorney general of the United States.

Loeb said when he encountered rioters, they wanted to have their picture taken and would often pose for photographers like himself.

“They were taking lots of selfies of themselves. You know, they just sort of seemed like happy to be there, sort of surprised that they were there, I would guess,” said Loeb.

CapitolWest Virginia state Republican lawmaker Derrick Evans was also charged with illegal entry after he allegedly recorded himself in a video entering the Capitol.

On Wednesday, Washington, D.C., Metropolitan Police Chief Robert Contee said that there were Molotov cocktails found in the cooler of a truck. On Friday, Lonnie Coffman was arrested for allegedly possessing them.

While K-9 units were searching for explosives at the Republican National Committee and Democratic National Committee, they got a hit on what allegedly was Coffman’s truck — and upon approaching the truck they saw the handle of a handgun that was ultimately recovered from the passenger seat, according to a complaint.

Officers also allegedly recovered 11 mason jars containing an unknown liquid with a golf tee on the top of each jar, cloth rags and lighters.

“Upon finding these materials, bomb technicians observed that the items appeared to be consistent with components for an explosive or incendiary device known as a ‘Molotov Cocktail,” the complaint says.

Coffman was sitting in the passenger seat of someone else’s car and asked officers whether the bombs from the RNC and DNC were cleared, according to the complaint.

Officers then asked his name and he said it was Lonnie. They then detained him because his matched the name of the owner of the truck. After further questioning he was arrested when they found a handgun and, in his pocket, the keys to the truck that contained the alleged Molotov cocktails. It is alleged that Coffman’s vehicle contained 11 Molotov cocktails and firearms.

Coffman is not believed to be a suspect in the placement of pipe bombs outside the RNC and DNC, the complaint says. But he was charged Friday with possession of an unregistered firearm (destructive device) and carrying a pistol without a license.

Christopher Michael Alberts was one of the protesters who stormed the Capitol and was “slow in responding to orders to leave the premises,” according to a complaint. That is when a Capitol Police quoted in the complaint said he noticed Alberts had a handgun on his hip and was wearing a bulletproof vest and a backpack. Alberts tried to flee when officers noticed his weapon, but officers detained him quickly, according to the complaint.

“A black Taurus G2C 9mm was recovered from D-1’s right hip. Additionally, a separate magazine was located on D-1’s left hip. Both the gun and the spare magazine were in held in two separate holsters. The handgun had one round in the chamber with a twelve round capacity magazine filled with twelve rounds; the spare magazine also had a twelve round capacity and was filled with twelve rounds. MPD Officers also seized a gas-mask from the defendant’s person as well as the defendant’s backpack containing a pocketknife, one packaged military meal-ready to eat (MRE), and one first-aid medical kit,” the complaint says.

Alberts was charged with carrying a firearm on the grounds of the U.S. Capitol.

“When he was deterred from advancing further into the building, Leffingwell punched me repeatedly with a closed fist. I was struck in the helmet that I was wearing and in the chest,” an officer said in the complaint.

The complaint also adds that he apologized to the officer he struck, but was still arrested.

Leffingwell was charged Thursday with knowingly entering or remaining in any restricted building or grounds without lawful authority, assault on a federal law enforcement officer, and violent entry and disorderly conduct on Capitol grounds.

Joshua Pruitt was arrested for not complying with the Washington, D.C., mayor’s 6 p.m. curfew, according to his complaint.

While at the processing center, court documents say, a Metropolitan Police Department investigator noticed his picture matched one on The Washington Post website and identified him as someone who was allegedly in the Capitol.

When officers asked Pruitt if it was him in the Capitol, he said said it was and that he was only attempting to de-escalate the situation. He was charged Thursday with knowingly entering or remaining in any restricted building or grounds without lawful authority.

Editor’s Note: This story has been updated with additional arrests and charges and corrects that charging information came from criminal complaints, not indictments.