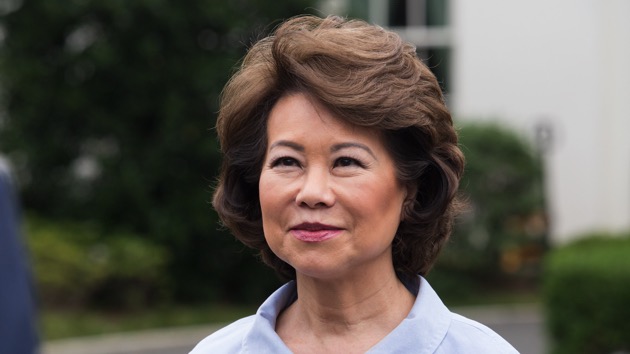 (WASHINGTON) — Transportation Secretary Elaine Chao on Thursday became the first Trump Cabinet member to resign because of Wednesday’s storming of the Capitol.

In a tweet to agency staff, Chao said she was “deeply troubled” by what she called an “entirely avoidable event as supporters of the President stormed the Capitol Building after a rally he addressed,” adding that it was something “I simply cannot set aside.”

Chao is married to Senate Majority Leader Mitch McConnell who about the same time issued a statement citing “those who incited” the rioters.

“The ultimate blame for yesterday lies with the unhinged criminals who broke down doors, trampled our nation’s flag, fought with law enforcement, and tried to disrupt our democracy, and with those who incited them. But this fact does not and will not preclude our addressing the shocking failures in the Capitol’s security posture and protocols,” he said.

In her resignation letter, addressed to President Donald Trump, DeVos cited the president’s role in Wednesday’s “unconscionable” attack on the Capitol.

“We should be highlighting and celebrating your Administration’s many accomplishments on behalf of the American people,” she wrote. “Instead, we are left to clean up the mess caused by violent protesters overrunning the U.S. Capitol in an attempt to undermine the people’s business.”

“There is no mistaking the impact your rhetoric had on the situation, and it is the inflection point for me,” she added.

The resignation is effective Friday, according to the letter.

DeVos, who has long been criticized by teachers’ unions, received a blunt goodbye from the American Federation of Teachers.

“Good riddance,” the union said in a statement.

A Treasury Department official confirmed to ABC News that Treasury Secretary Steven Mnuchin intends to fulfill his duties through the end of the president’s term.

Mnuchin, one of Trump’s most loyal and one of the few remaining original Cabinet secretaries, is currently traveling abroad.

At a joint news conference with Israeli Prime Minister Benjamin Netanyahu, Mnuchin said, “The violence that occurred last night was completely unacceptable. These actions must stop. Our democratic institutions have been strong for a very long period of time. Our democracy will prevail, and our institutions will remain strong. Now is the time for our nation to come together as one and respect the democratic process in the United States.”

Acting Secretary of Defense Christopher Miller issued a new statement Thursday condemning the violence at the Capitol and saying he will remain on the job through Jan. 20.

He called the rioting “reprehensible and contrary to the tenets of the United States Constitution.” He said that because of the service of the D.C. National Guard, and federal and local law enforcement, “the attempts of those who tried to stop our government from functioning failed.

“I strongly condemn these acts of violence against our democracy,” he added. “I, and the people I lead in the Department of Defense, continue to perform our duties in accordance with our oath of office, and will execute the time-honored peaceful transition of power to President-elect Biden on January 20.”

Agriculture Secretary Sonny Perdue told reporters in Georgia he has not been in touch with any other Cabinet members about possibly invoking the 25th Amendment to remove Trump from office and doesn’t plan to do so, indicating, but not specifically saying, he will not resign.

“I’m saddened by the events that I saw, very sad. That’s not what I know of as America we transition power in our democracy usually in a very way so I’m very saddened by what I saw and I’m very discouraged by the people that were there that felt compelled to breach the Capitol and do the things that they did. That’s not representing who Americans are it’s certainly not representing who Georgians are,” Perdue said.

Energy Secretary Dan Brouillette said he will be “fully focused” for the next 13 days and is committed to a smooth transition of power.

EPA Administrator Andrew Wheeler sent his staff a message Thursday morning saying he was “completely disgusted” by the Capitol attack on Wednesday, but made no mention or allusion to the role of the president.

He also said he intends to stay on the job until Jan. 20.

Amanda Seyfried recalls the “trauma” resulting from the difficult birth of her son
‘Rust’ assistant director fired from a film in 2019 after on-set gun mishap
COVID-19 live updates: FDA panel hours away from vote on Pfizer vaccine for kids
How did California go from the epicenter of the US pandemic to the lowest statewide transmission rate?
Annual border arrests hit record high despite trending down in recent months
Truth Social could provide Trump with infusion of cash — but critics are concerned about its content