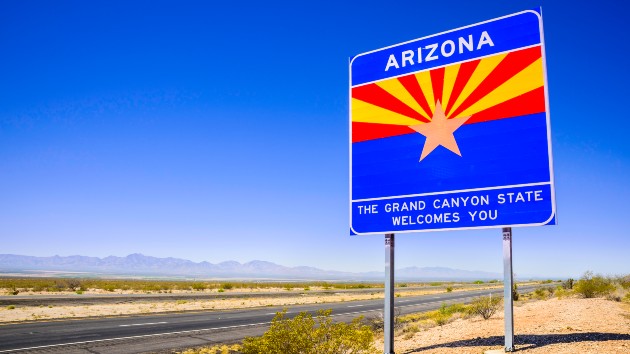 (NEW YORK) — Arizona has become “the hottest hot spot” for COVID-19, as the state experiences the highest case rates in the world and record hospitalizations — and health officials warn the numbers are only going to get worse due to holiday gatherings.

Arizona reported 9,909 new COVID-19 cases and 297 new deaths on Thursday, the highest single-day tally yet, though the state health department noted most were due to the “death certificate matching process.”

Arizona has the worst rates of COVID-19 cases globally, according to 91-divoc.com, a COVID-19 tracker. The state currently has the highest seven-day average of COVID-19 infections per capita of any region in the world, based on Johns Hopkins University data.

Arizona also leads the country in hospitalization rates, according to The COVID Tracking Project. There were 4,920 hospitalizations reported Thursday — the highest number for the fourth straight day.

Statewide, 7% of intensive care unit beds were available as of Wednesday, according to data from the Arizona Department of Health Services.

Banner Health cares for roughly half of all COVID-19 patients in Arizona, officials said. The situation in the state is “beyond concerning,” Dr. Marjorie Bessel, chief clinical officer for the hospital system, said during a press briefing Wednesday.

“Hospitals in the state of Arizona are stretched very thin right now despite a considerable amount of preparation and work to increase capacity,” Bessel said.

Banner Health canceled elective surgeries at all of its Arizona hospitals on Jan. 1. Its occupancy in Arizona is above 100% of its licensed bed capacity, Bessel said Wednesday, though staffing is the system’s greatest concern.

“We can create beds, we believe,” she said. “It’s the skilled staff, that expert nurse, that wonderful doctor, that incredibly diligent respiratory therapist, those are the individuals that are stretched really thin right now. And there’s just not that many more of them in the entire country because they are deployed in each and every state trying to meet the demands of every community.”

Bessel anticipates hospitalizations will only get worse in the coming weeks due to the “stacking effect of Thanksgiving activities, Christmastime activities and New Year’s Eve.”

Wait times are another concern, as hospitals may have to hold patients in emergency rooms because there are no available staffed ICU or inpatient beds.

Calls for mitigation — and enforcement

As Arizona has become the “hottest hot spot for COVID,” Bessel is urging residents to “shrink your circle” to just those in their household, wear a mask with people outside their circle and “stop attending unmasked gatherings even if you feel well.”

“It is very likely that someone at those gatherings has the virus, and they are spreading it to you,” she said, noting that contract tracing is not beneficial because COVID-19 “is so uncontrolled in our state.”

“We need every one of you to do your part so that hospitals can remain open and accessible for all those in need of health care,” she added.

The health official also called for increased mitigation measures, such as a statewide mask mandate, curfew and halting indoor dining, and enforcement of existing measures.

The state has not issued a mask mandate, though several cities and counties have. Citations for disregarding mask orders have not been issued in Tucson, Flagstaff or the Phoenix area’s 12 largest cities, according to a recent investigation by the Arizona Republic.

“There are steps in place, and if many of these leaders that are reaching out and asking for additional actions would actually enforce and have accountability around the steps that are already there, we can further reduce the spread of this and save lives,” Ducey said last month at a press briefing.

In a Jan. 3 report obtained by ABC News, the White House Coronavirus Task Force said that Arizona’s post-holiday numbers “raise significant concerns” regarding community spread of COVID-19, and recommended a “combination of aggressive mitigation with further restrictions and substantial acceleration of vaccinations.”

The Republican governor has not tightened restrictions despite calls to do so.

The state has been prioritizing vaccination to combat the pandemic.

“The vaccine will save millions of lives going forward, and that is our focus today,” Ducey said last month.

More than 113,00 people as of Thursday, including frontline medical workers and residents and staff at nursing facilities, have been vaccinated in Arizona, according to the state health department.

The goal is to get some 3.5 million people vaccinated, officials said.

Staffing is a concern at vaccination sites, Bessel said. Banner Health is operating three vaccination sites throughout the state, requiring hundreds of staff and volunteers each day. Bessel herself has been redeployed to Banner Health’s vaccination pod at the Arizona State Fairgrounds several times to administer vaccines, a spokesperson told ABC News.

“We are stretching ourselves as much as possible because we do believe that [the] vaccine is the way that we get out of the pandemic,” she said.

Volunteers trained by the Arizona National Guard started administering the COVID-19 vaccine on Wednesday and supporting vaccination sites in Arizona, officials said. They include retired medical professionals and people with a medical background.

“When people saw us out here, they wanted to step up and volunteer, which is exactly what we need,” U.S. Army Col. Tom Leaper, the Arizona National Guard state surgeon, told Phoenix ABC affiliate KNXV-TV. “We were contacted by a group of volunteers that said they wanted to help protect their state and their communities, and what can they do to help.”

For now, it is of “critical importance” that people continue to social distance, White said.

“Even though the vaccine is starting to be distributed in our community, it will be months before we are able to decrease our restrictions,” he said. “If we don’t continue to do this, we are in danger of overwhelming our clinical departments and our hospitals.”