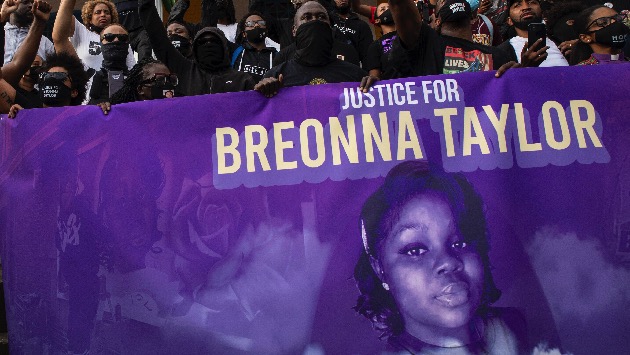 (LOUISVILLE, Ky.) — Two Louisville police officers have been fired from the department for their roles in the shooting death of Breonna Taylor.

The terminations of officer Myles Cosgrove and Det. Joshua Jaynes were made official on Tuesday in letters from interim Police Chief Yvette Gentry, who held closed-door hearings with the officers and their attorneys on Monday.

Cosgrove, who fired the shot that killed Taylor per a ballistics analysis, and Jaynes, who prepared the search warrant, received pre-termination letters last week.

Gentry said Cosgrove violated use of deadly force procedure when he fired 16 rounds into Taylor’s apartment. Two rounds hit Taylor, one of which was fatal.

In Gentry’s termination letter to Cosgrove, she said he “did not describe target/threat isolation or target/threat identification but instead you describe flashes that you did not properly evaluate as a threat.”

Gentry wrote that Standard Operating Procedure says the “person against whom the force is used must pose ‘an immediate threat of death or serious injury."”

Cosgrove’s shots went in three different directions “indicating you did not verify a threat or have a target acquisition,” she wrote.

“Despite your years of service, I cannot justify your conduct nor in good conscience recommend anything less than termination,” she wrote.

Cosgrove’s attorney, Jarrod Beck, said Dec. 29, “I can confirm that Mr. Cosgrove has received a pre-termination notice. Otherwise, we have no comment.”

Jaynes wasn’t at the shooting but prepared the search warrant for Taylor’s apartment.

In Gentry’s termination letter to Jaynes, she said he violated the Standard Operating Procedure for truthfulness. She accused him of being untruthful in the search warrant affidavit when he said he verified through a U.S. postal inspector that Taylor’s ex-boyfriend had been receiving packages at Taylor’s address.

“You did not have contact with a US Postal Inspector. You did not ‘verify’ this statement you swore to in the affidavit,” Gentry wrote. “I acknowledge that you believe you prepared the search warrant in good faith. However, you failed to inform the judge that you had no contact with the US Postal Inspector. Your sworn information was not only inaccurate; it was not truthful.”

Jaynes’ lawyer, Thomas Clay, said via email on Dec. 29, “I fully expect Mr. Jaynes will be terminated after the ‘hearing’ no matter what the evidence is to the contrary. We will appeal any disciplinary action taken against Mr. Jaynes because I believe the evidence shows he did nothing wrong.”

The officers have the right to appeal, the Fraternal Order of Police said.

Cosgrove and Jaynes had been on administrative reassignment following the March 13 shooting that killed the 26-year-old emergency room technician.

Taylor was shot after officers arrived at her door in the middle of the night trying to execute a “no-knock” warrant as part of an investigation into a suspected drug operation allegedly linked to her ex-boyfriend.

Taylor’s boyfriend, who said he thought intruders were trying to break in, fired a shot. The officers returned fire, fatally shooting Taylor.

One officer, Brett Hankison, was fired and the others were placed on administrative duty. Initially no charges were brought against the officers, igniting protests across the country.

Kentucky State Attorney General Daniel Cameron said the officers were justified in their use of deadly force because Walker fired the first shot.

Months later, Cameron convened a grand jury that indicted Hankison on three counts of first-degree wanton endangerment for firing into the apartment directly behind Taylor’s, where three people were inside. Hankison pleaded not guilty.

Sgt. Jonathan Mattingly, who also fired into Taylor’s home, has not been dismissed by the department. Mattingly was shot in the leg during the raid.

None of the officers were charged in connection with Taylor’s death.

Three tourists injured in Times Square shooting
3 dead, including suspect, 2 injured after ‘horrific’ shooting, fire in Maryland
First responders talk about the often-hidden pain and trauma of working in a pandemic
Warren Buffett’s Berkshire Hathaway stock price is too high for Nasdaq to handle
Baker donates cakes to families that lost children for Mother’s Day
Mom opens up about botched police investigation into daughter’s murder