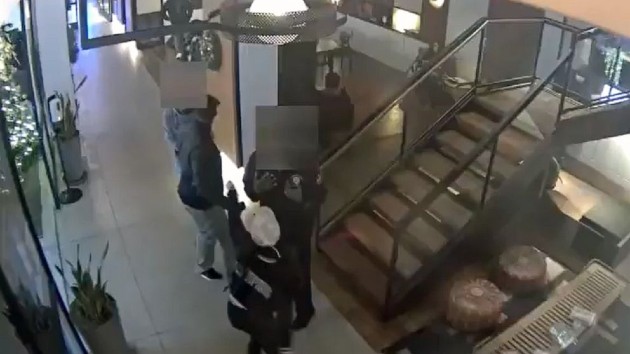 (NEW YORK) — The Manhattan District Attorney is actively investigating the caught-on-camera altercation between a Grammy-winning jazz musician and a woman who falsely accused his son of stealing her cellphone.

Newly released surveillance video from the Arlo Hotel in New York City shows the unidentified woman wrestling with Keyon Harrold Jr. in the lobby and tackling him to the ground.

New York City Police said on Wednesday that following a review of the video from the hotel, located in the Manhattan neighborhood SoHo, they are considering possible charges for the unnamed woman, including assault, grand larceny and attempted robbery.

The news came on the heels of a meeting between prosecutors and Harrold’s family, along with their attorney Ben Crump.

“We met with the district attorney and he informed us that they had seen the hotel surveillance video and that it was very disturbing,” Crump said.

Police said they have identified the woman in the video but said that she has yet to come forward and reportedly lives out of state.

According to CNN, in an unreleased phone interview, the woman is disputing the claims against her that she attacked Harrold or his 14-year-old son. The woman allegedly claims that she was the one assaulted, seen on the ground at one point in the initial video, but it was not clear from the footage if she fell or was pushed. She also said that things escalated after she first asked to see hotel surveillance video while falsely demanding the teen had taken her phone.

The woman said that she asked someone else in the lobby to “empty their pockets,” CNN reported, before confronting Harrold Jr.

“Her phone was brought to her in an Uber,” Harrold said at a press conference Wednesday.

The teen’s mother, Kat Rodriguez, who was not there at the time and heard about the incident after the fact, said she has no words for the woman in question.

“There’s nothing to say to her, but look at the video, you have seen it. We have seen it,” she told ABC News’ Good Morning America.

Harrold added, “And it’s just disappointing and it’s unfortunate. And I mean, it’s traumatic. It just does not need to happen.”

Rodriguez also called the altercation a case of racial profiling.

“Isn’t it the other way around — innocent until proven guilty?” she posited at the press conference. “We are all supposed to have equal rights but the reality is we don’t. So yes, this is a racial justice issue.”

Harrold further detailed the repercussions of the incident on behalf of his son.

“The idea of trauma goes above any charge that could ever be had,” he said. “I want my son to grow up whole. That’s all we want.”