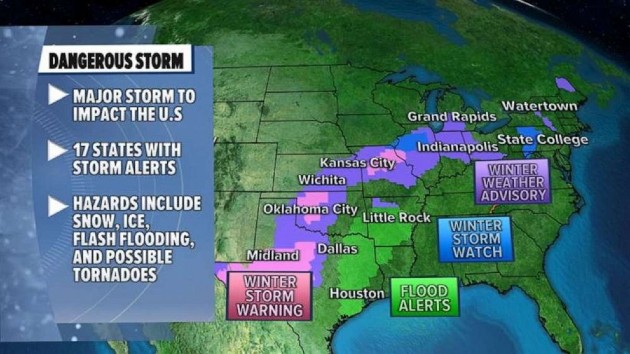 (NEW YORK) — A major New Year’s storm could bring widespread ice from Texas to the Northeast.

As of Thursday morning, two storms are moving across the U.S. The first storm is bringing rain to the Northeast and snow north and west of the major cities. Accumulations should remain rather light, but some slick spots will be possible.

Parts of Texas and Arkansas are seeing intense rain, which could lead to flash flooding.

One storm system is heading to parts of Texas before tracking across much of the country, impacting the central and eastern U.S.

A tornado watch has been issued for parts of southeast Texas, including Houston and Galveston, through the afternoon Thursday. A few tornadoes will be possible in addition to gusty winds up to 70 mph.

The storm will bring severe weather from eastern Texas to western Florida by Thursday night.

Damaging winds will also be likely from Houston to Montgomery, Alabama.

Several rounds of storms could bring more rain and flooding risk to Texas and Arkansas.

Over six inches of snow could fall in parts of Texas.

Meanwhile, snow and a wintry mix are expected to move from parts of central Texas through the central Plains.

Roads could be slippery from Kansas to Indiana.

Power outages are possible in the Oklahoma City, Wichita and Kansas City areas.

During the day on Thursday, a wintry mix is expected in major cities in the Midwest including Chicago and Grand Rapids, Michigan.

The wintry mix will arrive in much of Pennsylvania and New York state on Friday.

Downed trees, power outages and dangerous roadways are possible in the Midwest and Northeast.

The extreme Northeast could see 3 to 6 inches of snow.