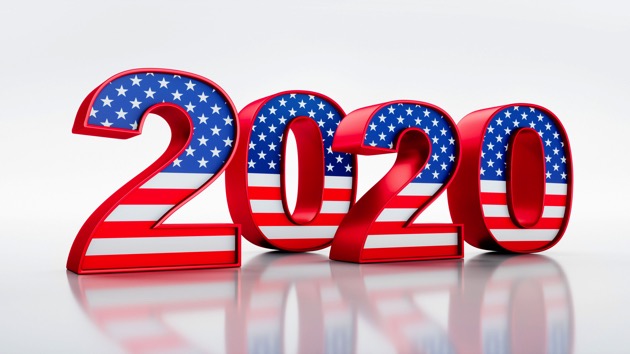 (NEW YORK) — As 2020 ends, so does one of the most explosive and unprecedented years in American politics.

The nation witnessed its leaders clashing amid a presidential impeachment, a once-in-a-lifetime pandemic and an election delayed by extended vote counts and legal battles.

It was a year of firsts: The first time a president sought reelection after being impeached; the first woman elected vice president; a record-breaking number of women elected to Congress. Then, for the first time in modern history, a peaceful transfer of power was put in doubt.

Here are some of the most memorable moments in an unforgettable year:

Bitter partisanship divided Congress — and the nation — from the very start.

Trump entered 2020 facing a trial in the Senate — only the third American president to do so — after a months-long inquiry by the House of Representatives which, in December, had voted along party lines to impeach him on charges of abuse of power and obstruction of justice.

The trial began Jan. 16 with the outcome all but determined.

Republicans and Democrats, while pledging to take their oaths as jurors seriously, at the same time declared that the proceedings were either — depending upon their party — necessary to save the country or a complete waste of time.

Armed with witness testimonies from the House, documents and a transcript of Trump’s infamous phone call — in which he urged Ukraine’s president to promise to investigate political rival Joe Biden and his son, Hunter — House Democratic impeachment managers, led by Rep. Adam Schiff, argued Trump had abused his power to try to win reelection.

Some Senate Republicans, in lockstep with Trump’s cries of “witch hunt,” said Democrats were trying to overturn the results of the 2016 election because the Mueller investigation came up short. Even GOP senators who disagreed with the president’s actions argued the American people, instead, should pass judgment on Trump in November.

The cloud of impeachment that had hung over his presidency for six months was lifted in less than three weeks when the Senate’s Republican majority voted to acquit Trump on both charges Feb. 5. Sen. Mitt Romney of Utah was the only Republican to vote to remove Trump from office.

Far from showing remorse, an emboldened Trump used his acquittal to rally his reelection effort.

“We went through hell,” Trump told Cabinet members, Republican lawmakers and his family at a White House celebration. “Now we have that gorgeous word. I never thought a word would sound so good. It’s called total acquittal.”

The crowded field of contenders vying for the Democratic nomination started to narrow as 2020 began with 18 candidates dropping out before the first primary, leaving nearly a dozen under pressure to appeal to both party progressives and moderates.

Trump mocked the candidates on Twitter as his impeachment trial came to a close, and the Democratic Party had to deal with an internal crisis with the meltdown of the Iowa caucuses on Feb. 3.

The first-in-the-nation caucuses were supposed to show, based on votes and not polls, where the candidates stood in the Democratic horse race, but after the state party found “inconsistencies” in the reporting of the results, the candidates — and the country — were left in the dark for days about how caucus-goers felt.

Then came New Hampshire, Nevada and finally South Carolina where former Vice President Joe Biden — propelled by support from Black Democrats — saw his campaign bounce back. After a series of additional victories, including a Super Tuesday triumph, Biden finally had a clear path to the nomination. One after another, Biden’s former rivals endorsed him, uniting in a message that defeating Trump was most important.

But just as his general election campaign was getting started, the spread of a novel virus forced much of the country into lockdown and the candidates had to adapt as never before.

By the beginning of March, as the coronavirus burned across the country and Americans were being told to stay at home and practice social distancing, Trump downplayed the deadly disease as comparable to the flu. By the end of the month, his White House coronavirus task force predicted 100,000 to 240,000 American lives would be lost by the end of the year — a toll the country would far exceed.

As Washington tried to blunt the economic impact, the Trump administration and congressional Democrats negotiated a $2.2 trillion coronavirus relief bill — the largest spending package ever passed — but as the situation worsened in the months to follow, partisan politics infected the response.

After 30 days of White House guidelines and with businesses crippled by lockdowns, Trump, sensing that his reelection strategy based on a strong economy was at stake, called to “Open Up America Again.”

“We cannot let the cure be worse than the problem itself,” Trump said.

Although he said he would let governors decide how to respond in their respective states, Trump lashed out against Democratic governors who continued stricter restrictions and tweeted to his supporters to “LIBERATE” Michigan and other battleground states even as hospitals complained of equipment shortages and the need for federal assistance.

As spring turned to summer, the White House began limiting appearances by the nation’s top infectious disease expert, Dr. Anthony Fauci, as he repeatedly broke from Trump’s rosy messaging on the pandemic. Trump’s supporters, taking their cues from the president, resisted stay-at-home orders and flouted guidelines designed to slow the spread.

Trump returned to the campaign trail in June with an indoor rally in Tulsa, Oklahoma — running in large part on his efforts to reopen the economy — despite health officials warning of the high probability the virus would spread. He railed against mail-in voting as states prepared for a presidential election amid an unprecedented pandemic.

His constant complaint was one he had made repeatedly in the past: the election would be “rigged” against him.

In the same month, Biden formally clinched the Democratic presidential nomination, setting him up for a challenge to Trump to play out against the backdrop of the coronavirus, economic collapse and civil unrest largely sparked by the death of George Floyd in Minneapolis police custody in May.

Biden went on to select former Democratic primary opponent and California Sen. Kamala Harris as his running mate in August, sending a powerful and historic statement as the nation continued to grapple with social change. Democrats praised how Harris, if elected, would not only be the first woman to serve as vice president, but would also be the first woman of color to be second-in-command and the highest-elected South Asian American in history.

“That I am here tonight is a testament to the dedication of generations before me. Women and men who believed so fiercely in the promise of equality, liberty and justice for all,” Harris said in a speech at the Democratic National Convention.

The conventions in August were, in many ways, emblematic of how each party viewed the pandemic. The Democratic Party opted for its speakers to be virtual, except for Biden and Harris at the end. Trump, meanwhile, after first forcing Republicans to move their convention from North Carolina to Florida because that state had fewer coronavirus restrictions, eventually held the finale before a jam-packed crowd on the White House South Lawn.

Though the candidates were staged at a distance at the first presidential debate in September, they put on a chaotic and divisive show for America, repeatedly talking over each other — with Biden calling Trump a “liar” and a “clown” and Trump knocking Biden’s intelligence — as Fox News moderator Chris Wallace struggled to maintain control.

Just six weeks before the election, the death of Justice Ruth Bader Ginsburg turned the prospect of conservative control of the Supreme Court into an even more urgent campaign issue.

Republicans got Amy Coney Barrett confirmed in just three weeks, even though Senate Majority Leader Mitch McConnell had earlier used an election year as his reason to refuse to take up then-President Barack Obama’s nomination of Judge Merrick Garland.

Trump bluntly said he wanted Barrett on the court in time to maybe cast the deciding vote on an election challenge — and allow him to win. Her nomination ceremony in the White House Rose Garden on Sept. 26 became a coronavirus superspreader event with nearly a dozen attendees testing positive in the coming days.

Then, in the early hours of Oct. 2, Trump announced on Twitter that he and first lady Melania Trump had tested positive. Trump spent three days in the hospital before returning to the White House and, posing for a campaign-style video, defiantly ripped off his mask, telling the public not to let the virus dominate their lives.

That view, which Trump saw as vital to his political survival, may have cost Trump the Nov. 3 election. He spent the weeks leading up to laying the foundation for supporters to refuse to concede his loss — sowing doubt in the integrity of the mail-in ballots millions of Americans relied on amid the pandemic.

But, weeks later, in what many considered a referendum on Trump’s dismissive handling of the pandemic and his law-and-order response to civil unrest across America, voters turned out in record shattering numbers and ultimately rejected his leadership.

Painting the election as a battle for the “soul of the nation,” Biden ultimately won on a message of unity over division, compassion over anger, and reality over what he called Trump’s “wishful thinking” when it came to combatting the pandemic.

With a critical assist from Pennsylvania, the state where he was born, and by building back the Democrats’ “blue wall” in the Midwest’s battleground states, Biden was projected the 46th president of the United States five days after Election Day, ending the election but kicking off weeks of baseless legal challenges.

In his victory speech, Biden called the moment “a time to heal in America” and pledged, as he often did of the campaign trail, to be “a president who seeks not to divide but unify, who doesn’t see red states and blue states, only sees the United States.”

And a record number of ballots — nearly 160 million — were cast in a presidential race as voters opted for mail-in and early voting options in addition to voting on Nov. 3.

Biden won the most votes of any presidential candidate in American history with more the 81 million in his favor. Trump achieved the second-highest total at 74 million votes.

In the weeks following the election, Trump and his allies filed a barrage of lawsuits to nullify millions of votes in key battleground states Biden won with Trump alleging widespread voter fraud. However, election officials across the country, the Justice Department and Trump’s own legal team could not substantiate those claims.

The Supreme Court — with Barrett and the other two justices Trump nominated siding with the majority — declined to intervene in each election-related case brought before them, and Republican-controlled legislatures allowed the democratic process to unfold without overturning the will of voters, despite the president’s pressure campaign.

The election had made history in more ways than one.

At least 141 women — 105 Democrats, 36 Republicans — will serve in the next Congress, breaking the record of 127 who served in the last one.

As 2021 approached, Georgia runoff races on Jan. 5 would determine the balance of power in the Senate — and some Republican senators weighed whether to join a small group of House Republicans seeking to challenge the Jan. 6 Electoral College congressional certification.

Bipartisan duo in Congress announces commission to investigate Jan. 6 Capitol attack
MIT graduate accused of murdering Yale student is arrested in Alabama by US Marshals
Olivia Munn reportedly dating John Mulaney; admitted in 2015 to being “obsessed” with him
Amber Stevens West and Bresha Webb explain why their ‘Run The World’ characters are “so refreshing”
Carole Baskin offering $5k reward for missing tiger in Houston
At least nine wounded in shooting that Providence police say was between feuding groups