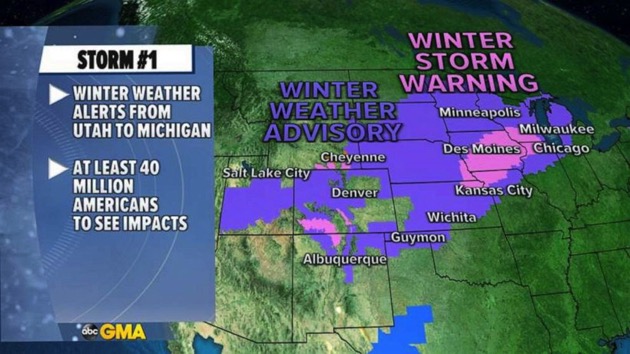 This is the beginning of a multi-storm event that will unfold over the remainder of the holiday week, with messy consequences still to come for much of the country.

Up to a foot of snow was reported in the mountains outside of Los Angeles, and very heavy snow caused major traffic delays near Mount Baldy.

Over 3 inches of rain fell in Santa Barbara, California, and downtown Los Angeles saw 1.81 inches of rain. This was the first significant rainfall of the season for the region.

On Tuesday morning, the storm will move through the Central Plains. It has already closed parts of I-80 in Nebraska due to hazardous road conditions.

Winter weather alerts have been issued for at least 40 million Americans, from Utah to Michigan, as this storm moves eastward.

Of particular concern Tuesday morning is the combination of snow, freezing rain and sleet moving through parts of Kansas and northwest Missouri. This could create dangerous travel conditions on roadways and cause power outages.

Heavy snow will expand into parts of the upper Midwest, especially from Minnesota to eastern Iowa and western Illinois. Up to 10 inches of snow may fall along the Illinois and Iowa border. This could cause major travel delays in the region.

Then, as the core of the storm passes into southern Canada, the trailing cold front on Thursday morning should bring a large line of rain transitioning to snow from the northeast back through the Southern Plains. Additionally, some snow may fall in the interior Northeast as well on Thursday morning. All of this could cause travel delays as Americans head toward New Year’s Eve.

Immediately behind this system on New Year’s Eve and New Year’s Day, another storm will start organizing in the South, pushing heavy rain and storms toward the Gulf Coast.

As this system becomes more organized, strong winds and brief tornadoes could move across parts of the Gulf Coast in time for New Year’s Eve and New Year’s Day.

The storm will push a rather wide swath of snow and wintry mix from Texas to Indiana, causing power outages and dangerous travel conditions due to ice.

Eventually, the bad weather will reach the Northeast as well. On the back end of the storm, a band of snow could impact parts of the Midwest, including Chicago and Milwaukee.