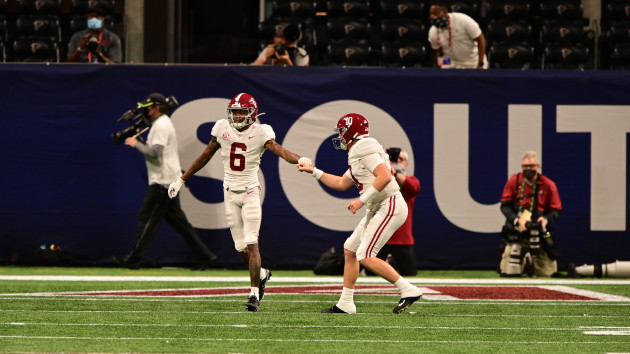 (NEW YORK) — The finalists for the 2020 Heisman Trophy were announced last night, and a pair of teammates from Alabama both made the cut.

The award will be given out on January 5, during a virtual ceremony.

All four players have had spectacular seasons, but the voting is expected to be fairly close.

Smith led the nation with 98 catches, 1,511 receiving yards and 17 touchdown receptions. If he were to win the Heisman, he would be the first non-quarterback to do so since Alabama running back Derrick Henry in 2015. The last wide receiver to win was Michigan’s Desmond Howard in 1991.

Jones led the Crimson Tide to an undefeated regular season, and a berth in the College Football Playoff as the top seed. He is in his first full year as a starting quarterback, tossing 32 touchdowns to just four interceptions.

Lawrence, expected to be the top selection in the NFL Draft, has gone 34-1 as Clemson’s starter. He, too, led his team to a College Football Playoff berth, locking down the #2 seed.

And Trask set several school records while compiling one of the best years a Florida QB has ever had — registering 43 touchdown throws and more than 4,000 yards through the air.