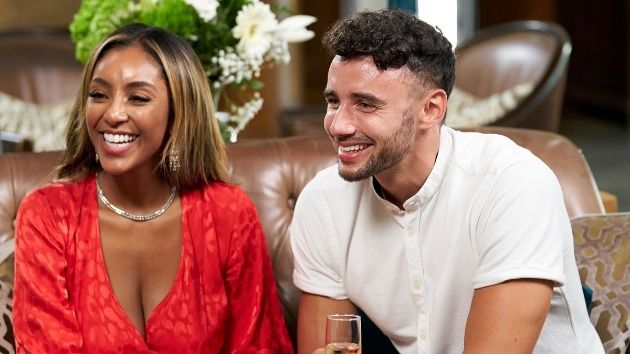 (LOS ANGELES) — The special two-night season 16 finale of The Bachelorette kicked off on Monday, with Tayshia ready to take her relationships with Brendan, Ivan and Zac to the next level in the fantasy suites.

However, just when she thought she’d found some clarity, a past suitor, for whom she had strong feelings, was back in the picture.

But first, Ivan and Tayshia’s ability to works as a team was put to the test with a challenge to break the record for the world’s longest kiss — while sitting in an ice bath.  They set a record of their own by maintaining a lip-lock for 6:35, topping the previous mark by more than a minute.

Later, Ivan told Tayshia he was falling in love with her her.  She returned the sentiment, telling Ivan she was falling for him too, and invited him to spend the night with her in the fantasy suite.

“It’s just wild, ’cause I love you too,” she replied. Addressing the camera, Tayshia gushes, “Zac loves me and I love Zac.”

It’s not exactly clear what went on between the two during their night in the fantasy suite.  All Zac would reveal was “There was definitely moments of passion and kissing and closeness.”

Finally, it was Brendan’s turn. However, while Tayshia considered Brendan “husband material,” he was becoming becoming less and less certain of his willingness to pop the question.

Needless to say, spending the first part of his date with Tayshia, checking out engagement rings and wedding bands, only added to his anxiety.

That night, he revealed that while Tayshia was “someone he could envision as the mother of his children,” the memory of his first failed marriage left big parts of him “still broken.”

Tayshia’s dream of spending a night in the fantasy suite with someone she “saw a future with” and would “end up with,” ended in an emotional goodbye send-off for Brendan.

The next day, Tayshia confided in season 13 Bachelorette, Rachel Lindsay, that she had gained the “clarity” she’d been seeking from each suitor.  However, she also indicated that she still had feelings for Ben, whom she’d sent home at the last ceremony.

With two roses and two men left, Tayshia was “feeling good” going into Tuesday the next rose ceremony.  That changes, though, when Ben showed up at her door with the bombshell announcement that he was “in love” with Tayshia.

“I see a life with you,” he insisted.

“I’m gonna need a minute,” Tayshia tells Ben as she leaves the room.

“I have a rose ceremony, what am I going to do with that?” she angrily asked a crew member.

US enters deferred prosecution agreement with detained Huawei executive Weng Manzhou
Harris interview with ‘The View’ delayed after co-hosts test positive for COVID-19
‘The View’ hosts leave mid-show due to testing positive for COVID-19, miss Vice President Harris interview
‘Celebrity Wheel of Fortune’ returns on ABC Sunday night
A special Bond: Daniel Craig named honorary commander in the Royal Navy
Gabourey Sidibe shares the special connection she has to her new podcast thriller ‘If I Go Missing the Witches Did It’