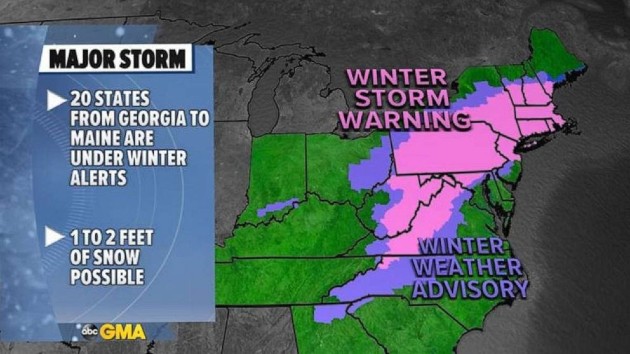 (NEW YORK) — A nor’easter is hitting the Northeast U.S., where it’s set to drop 1 to 2 feet of snow and possibly bring near-blizzard conditions.

The treacherous conditions already claimed the lives of two people in Pennsylvania on Wednesday evening. The two died in a multivehicle accident involving 30 to 60 cars and trucks, according to the Pennsylvania State Police.

At least 19 vehicles were tied up in a crash on the Henry Hudson Parkway in northern Manhattan, New York. There were six injuries in that accident, but none are considering life-threatening.

Winds could reach 50 mph in some areas, especially along the coast.

Overnight, snowfall rates could reach 1 to 2 inches per hour with near blizzard conditions possible in New York, New Jersey and New England.

The heaviest snow — 1 to 2 feet — will be from central Pennsylvania through New York’s Hudson Valley and Catskills, and into southern New England.

The storm has led to over 750 flight cancellations.

Snowfall has slammed the Washington, D.C., area, but it’s expected to quickly change to a wintry mix and rain. The rain and sleet ends Wednesday night, leaving about 1 to 2 inches of snow behind.

Snow is also falling in Philadelphia, but by the evening it’ll mix with sleet and rain. The city could see a total accumulation of 4 to 8 inches, while suburbs to the west and north of the city could see 1 foot or more.

In New Jersey, where over 1 foot is possible in some areas, Gov. Phil Murphy has declared a state of emergency beginning at 2 p.m.

Newark Airport reported a 2-inch-per-hour snowfall rate between 7 p.m. and 8 p.m., according to the National Weather Service. One to 2 inches per hour “are becoming common across the region,” it said.

The New York City area could see 6 to 14 inches of snow.

New York City has issued a travel advisory, urging residents to stay off the roads as much as possible.

Indoor dining is already banned in New York City and outdoor dining is suspended as of Wednesday afternoon, when the sanitation department’s “snow alert” went into effect. Restaurants, which are required to remove or secure outdoor furniture and remove their electric heaters, will be permitted to reopen when the “snow alert” ends.

Boston’s snow is expected to begin around 10 or 11 p.m. on Wednesday, continuing with heavy snow overnight and reaching a total accumulation of 6 to 12 inches.

Boston Public Schools will be closed Thursday as the snow is expected to continue through the day.

Behind the storm, the coldest air of the season will hit the Northeast. Wind chills — what it feels like — will fall to the teens and single digits Thursday night into Friday morning.