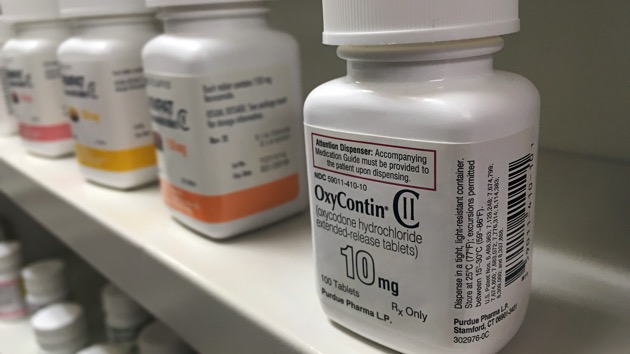 (NEW YORK) — A member of the Sackler family, which owns OxyContin-maker Purdue Pharma, expressed “sadness” over the nation’s opioid epidemic during a congressional hearing Thursday that marked the first time in years any family member faced public questioning about the family’s role in a crisis linked to more than 400,000 deaths.

“Right there in the middle of all this suffering was Purdue Pharma,” said Congresswoman Carolyn Maloney, D-N.Y. “This company played a central role in fueling one of America’s public health crises.”

David Sackler and Kathe Sackler, who each served for a time on Purdue Pharma’s board, appeared with chief executive Craig Landau.

Preceding them was Barbara Van Ryan, whose son Patrick Stewart died in 2004 of an overdose at 24.

“Words have not been invented that convey the horror and the pain of losing a child,” she told the committee.

Pete Jackson remembered his daughter Emily as “a sweet and friendly girl” who died after a single dose of OxyContin in August 2006.

“Emily took one pill. She went to sleep on the couch and never woke up,” he said. “My wife, my son and I were deeply traumatized. She had her whole life ahead of her.”

OxyContin was never intended to harm but “ended up being part of a crisis that has harmed too many people,” David Sackler told the committee. “I want to express my family’s deep sadness about the opioid crisis.”

“I know the loss of any family member or loved one is terribly painful and nothing is more tragic than the loss of a child,” Kathe Sackler told the House Oversight Committee.

There was no admission of wrongdoing.

Purdue Pharma recently pleaded guilty to three criminal charges as part of a settlement with the Justice Department.

Kathe Sackler was asked whether she could apologize to the American people for her role in the opioid crisis.

“I would be happy to apologize to the American people, for all the pain they’ve suffered and for the tragedies that they’ve experienced in their families and I thought I did that earlier in my opening comments,” she said. “That was my intention. I also am very angry. I’m angry that some people working at Purdue broke the law. I’m angry about it from 2007. And I’m angry about it now. Again, in 2020.”

That was not good enough for Chairwoman Maloney who pressed further.

Sackler responded that she’s struggled with that question, but ultimately wouldn’t do anything differently based on the information she has available to her.

“I have struggled with that question, I have asked myself over many years I have tried to figure out, was is there anything that I could have done differently. Knowing what I knew them, not what I know now. And I, I have to say this that I can’t. There is nothing that I can find that I would have done differently based on what I believed and understood then and how what I learned from management and the reports to the board and what I learned from my colleagues on the board, and it is extremely distressing.”

Her cousin David Sackler apologized and said that he has conducted himself “legally and ethically” and that the full record will demonstrate that.

“I still feel absolutely terrible that a product created to help, and has helped so many people has also been associated with death, and addiction.”

Lil Jon reveals what surprised him most about ﻿’Bachelor in Paradise’
Those suffering from sickle cell disease may finally be getting some relief as experts work on cure
Second dose of J&J COVID-19 vaccine results in stronger protection, company says
Biden to focus on ‘intensive diplomacy’ at UN amid tensions with allies
Republicans dig in on debt-limit standoff despite Democratic effort to mount pressure
‘Dancing with the Stars’ season 30 recap: JoJo Siwa’s historic first performance puts her atop leaderboard