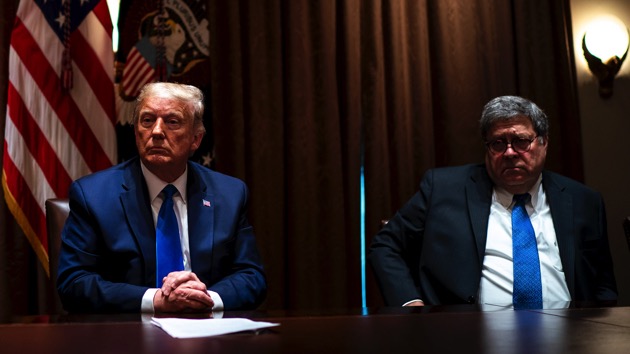 (WASHINGTON) — The federal government in 2020 executed more people than all 50 states combined, a new year-end report from the Death Penalty Institute found.

The DPIC is a non-partisan, death penalty information center that tracks death row inmates and executions.

“The Justice Department upholds the rule of law — and we owe it to the victims and their families to carry forward the sentence imposed by our justice system,” Barr said in a press release in July, after a brief holdup in the courts.

Acting Attorney General Jeff Rosen has supported the ramp up in executions writing an op-ed in the New York Times in July arguing that executions are “legally justified.”

“The death penalty is a difficult issue for many Americans on moral, religious and policy grounds. But as a legal issue, it is straightforward,” Rosen wrote. “The United States Constitution expressly contemplates “capital” crimes, and Congress has authorized the death penalty for serious federal offenses since President George Washington signed the Crimes Act of 1790.”

The DPIC found that 60% of all executions that were carried out this year were by the federal government, and Texas which has traditionally been a place where executions are carried out regularly only saw three in 2020.

Overall, the DPIC concluded that executions have been trending downward at a state level, with only five states carrying out execution but not federally — and there are still more to come before Joe Biden’s inauguration.

The DPIC also found that 73% of all executions were halted in some way.

The other two reprieves came in cases in which Tennessee Gov. Bill Lee delayed executions as a result of pandemic-related concerns. Nine execution warrants were withdrawn, removed, or rescheduled.”

The DPIC also found that five innocent men were exonerated and taken off death row, two were executed who were likely innocent and “several others” were granted retrials.

“At the end of the year, more states and counties had moved to end or reduce death-penalty usage, fewer new death sentences were imposed than in any prior year since capital punishment resumed in the U.S. in 1970s, and states carried out fewer executions than at any time in the past 37 years,” said Robert Dunham, DPIC’s executive director and the lead author of “The Death Penalty in 2020: Year End Report.”

“What was happening in the rest of the country showed that the administration’s policies were not just out of step with the historical practices of previous presidents, they were also completely out of step with today’s state practices.”

The report highlights that every person executed this year committed the crime under the age of 21 and Colorado became the 22nd state to outlaw the death penalty.